Mr. Zinn and Mr. Whitwell Want to Go to Washington 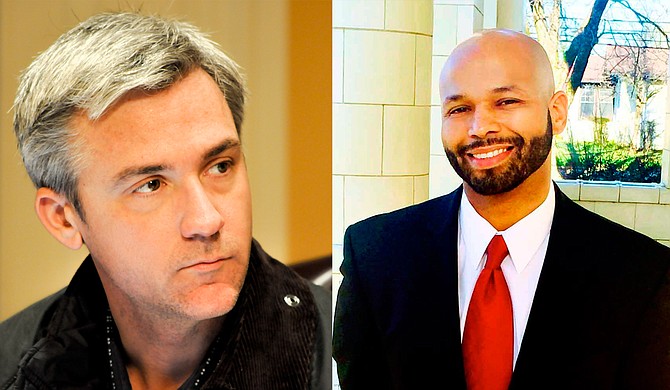 Quentin Whitwell (left), a Republican lawyer and lobbyist, and Walter Zinn (right), a Democratic attorney and political strategist, are vying for an open congressional seat in north Mississippi but have differing views on their relationship to Jackson. Photo by Trip Burns.

They worked together at Jackson City Hall, one as a mayoral aide and the other as a maverick councilman. One's an African American Democrat and devotee of the late radical mayor Chokwe Lumumba. The other is white and was the only Republican member of the seven-member city council. One has no hair; the other's graying crown has vacillated over the years between mop top to crew cut. Now, the men are squaring off for a seat in the United States Congress.

It sounds like the premise for a sitcom, but it's the real life story of Walter Howard Zinn and Quentin Whitwell.

The men, both former Jackson residents, are two of the 13 men competing in a May 12 special election to replace the late U.S. Rep. Alan Nunnelee, who died in February, as the representative for the state's 1st Congressional District.

The Mississippi 1st is one of two congressional districts that do not touch the Jackson metropolitan area. The other, the 4th District, is anchored in southern Mississippi and includes the Gulf Coast region.

But the candidates are taking different approaches when it comes to their ties to the capital city: Zinn embraces it; Whitwell hardly mentions it.

Zinn is a 34-year-old native of Pontotoc, which also happens to be the hometown of both Mississippi's representatives in the upper chamber of Congress—U.S. Sens. Thad Cochran and Roger Wicker. Zinn counts both his service to Jackson, as governmental-affairs director to former Mayors Lumumba and Harvey Johnson Jr., along with his growing up in blue-collar northeast Mississippi, as his chief qualifications.

During his time in the Lumumba administration, Zinn helped the 1-percent sales tax referendum pass with 90 percent of the vote and says he helped manage major infrastructure crises in the state's most populous city.

Zinn believes he has sufficient bipartisan cred to appeal to some Republicans, including the fact that he worked for Wicker, when he served in the House of Representatives.

"A lot of people thought I was going to be a Republican, but 9-11 happened," said Zinn, who opposed the Bush administration's response to the attacks.

He adds that he's been aggressive in pushing that message, as well as touting health-care expansion and the Affordable Care Act even as most of his Republican opponents are running on a promise to dismantle Obamacare.

"That's crazy to be at the bottom and yelling up at the president," Zinn told the Jackson Free Press, referring to Mississippi's perennial low health rankings. "No one is presenting a real plan or a vision to move this congressional district forward."

By contrast, Whitwell is embracing his family's ties to north Mississippi, including his father's tenure as U.S. attorney for the state's Northern District, and playing down his own connections in Jackson, which included being twice elected to the Jackson City Council, and working as a lobbyist in the Capitol and attorney. In his ads for the congressional seat, Whitwell has taken to pronouncing his surname "WIT-wul" (a la Starkville) instead of WHIT-well, as he did when he lived in Jackson.

Whitwell, who did not return phone messages from the Jackson Free Press, was elected to the Jackson City Council from Ward 1 in 2009 and 2013. He unexpectedly announced in August that he would step down from the seat he held for five years at the end of October. He told the Jackson Free Press at the time that other personal and professional pursuits have had to take priority. Among those is the opportunity for his son to be trained under tennis coaches at the University of Mississippi, Whitwell's alma mater.

He is running on a traditional conservative platform, emphasizing what he calls "traditional marriage" and "protecting the life of the unborn." Whitwell also wants to shrink the size of government and repeal Obamacare. In his newest campaign ad, posted May 4, Whitwell focuses on strengthening national security by invoking the attacks of Sept. 11, 2001, and images of the so-called Islamic State organization.

If elected, Zinn said he would like to serve on one of the House money committees, but because those appointments do not go to freshmen members in the minority party, he said he would also like to sit on health, education or agriculture committees.