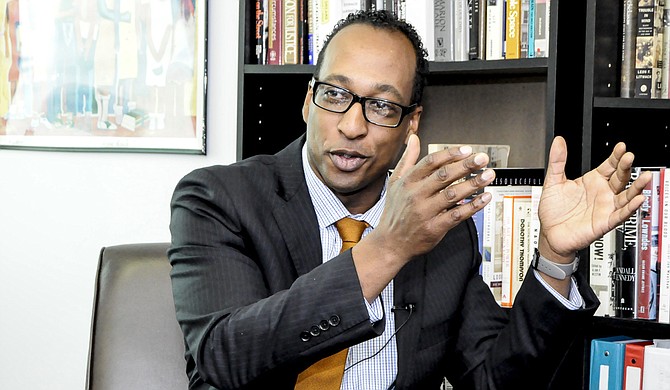 Budget Committee Chairman and Ward 2 Councilman Melvin Priester Jr. said at this morning's meeting that overtime pay at the Department of Public Works is slightly higher than last year because the department is not properly staffed. Photo by Trip Burns.

Last week, Mayor Tony Yarber declared a state of emergency that he said would help the city take immediate action to repair infrastructure around town—but does the city have the manpower to handle the emergency projects?

At today's meeting of the Budget Committee, council members got a look at the city's budget health for the first quarter of the current fiscal year. Trivia Jones, the city's director of administration, told the committee that overtime pay at the Department of Public Works is slightly higher than last year.

Yarber's declaration came after several water-main breaks over a 24-hour period that resulted from the frigid winter and recent heavy rain that placed additional stress on already brittle and failing roads and underground pipes. Yarber went on to say the water-main breaks can cause extensive damage to public and private property and could lead to sewer problems and wastewater back-ups, which are "obvious threats to public health."

Emergency loans from the Mississippi State Department of Health would allow the city to start work immediately, even before the paperwork is complete. The declaration could also give the city access to so-called quick-release funds from the United States Department of Transportation for failed or failing bridges, as well as the Federal Emergency Management Agency, which the U.S. Department of Homeland Security oversees.

Yarber said his administration is working on a plan to staff up operations, particularly to respond to public-safety issues and public works emergencies.

The Jackson Police Department also saw the amount the city paid on overtime more than double to $971,000 this year from $354,000 in the last year. Yarber said the increase reflects what he called a crime spike earlier this year and the fact that the city is actually paying out the overtime owed to police officers.

In 2014, the city settled with 41 Jackson Police Department officers for unpaid overtime between 2009 and 2011. The U.S. Department of Labor sued the city on the officers' behalf for $177,500. Yarber took responsibility for the OT increase at the department.

"If there was an argument to be had, that would be an argument I'd be willing to have on behalf of public safety," he told the Budget Committee.