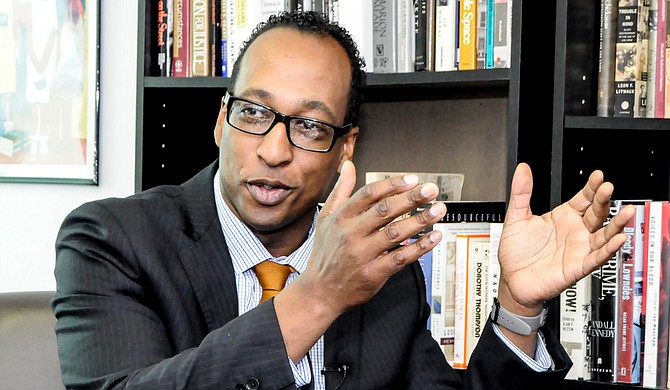 Judy Hughes owns less property than when she bought her southwest Jackson home three decades ago.

The loss wasn't the result of a real-estate transaction, but rather because a ditch behind her house on Brookhollow Drive has eroded 14 feet off her property over the years. When the ditch floods, Hughes and her neighbors are trapped; if there's a medical emergency, a patient might need to be airlifted to a hospital.

"The city has known this problem that we're having for almost five years and has done nothing about it," Hughes said during the Feb. 24 Jackson City Council meeting's public-comment period.

Council President De'Keither Stamps, who represents Hughes and her neighbors in Ward 4, points to the Brookhollow problem as a public-health hazard that Mayor Tony Yarber's March 26 emergency declaration aims to remedy.

Speaking to reporters last week, Yarber said the move was to protect the city's water quality and, with the declaration, he hoped to get access to federal funds that can expedite infrastructure repairs in the city.

An official signed declaration from the mayor might not have been necessary to get state and federal help, however.

Liz Sharlot, a spokeswoman for the Mississippi Department of Health, said Mississippi cities do not necessarily need to sign an emergency declaration to apply for one of the low-interest MSDH loans. Rather, the city must work with an engineer to develop a plan before applying.

"Cities apply for this all the time and do not declare a state of emergency," Sharlot told the Jackson Free Press.

Nancy Singer, a spokeswoman for the Federal Highway Administration, said accessing quick-release funds usually involves a disaster declaration from a governor. Yarber said last week that Gov. Phil Bryant supported the city's declaration, but Bryant has not issued his own decree.

The mayor told reporters last week that the city can apply for an emergency loan from the Mississippi State Department of Health with the declaration. In addition, the declaration could also give the city access to so-called quick-release funds from the United States Department of Transportation for failed or failing bridges, as well as the Federal Emergency Management Agency, which the U.S. Department of Homeland Security oversees.

Yarber went on to say that water main breaks can cause extensive damage to public and private property, and could lead to sewer problems and wastewater back-ups, which are "obvious threats to public health." Yarber also stressed that the quality of the water coming out of the city's water-treatment plant remains high, but some residents might see boil-water notices, which the city is legally required to issue when busted pipes cause drops in water pressure. The Red Cross and Salvation Army could be called upon to provide bottled water to area dormitories for students who cannot boil their water, Yarber said.

The mayor also said declaring an emergency lets the city go through a different, expedited procurement procedure than normal.

Ward 2 Councilman Melvin Priester Jr. and fellow council members groaned about not getting a heads up about the emergency order; they found out around the same time as the local media. Priester, who chairs the Budget Committee, promptly started reading the 22-page Mississippi state auditor's guide to emergency procurement. Priester said if Yarber thinks declaring an emergency lets his administration circumvent the emergency rules, then the mayor is mistaken.

"I don't think anyone in Jackson disagrees that our infrastructure is at a critical stage right now, and we need to act with a sense of urgency," Priester said. At the same time, Priester, who chairs the council's Budget Committee, believes Yarber's declaration puts the city in uncharted waters.

"If you can declare an emergency about aging infrastructure when there hasn't been a tornado or hurricane or breakdown at the water-treatment plant, and magically be able to draw from a big pool of money with no strings attached, every municipality in Mississippi would have done it," Priester said.