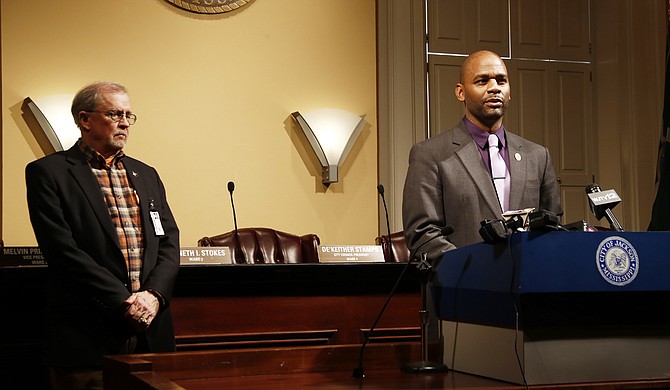 The City of Jackson is hemorrhaging cash at its Water and Sewer Business Administration. Detailed in a report completed by an independent consulting firm hired last fall, the losses are primarily due to bad management practices and could even involve malfeasance at the WSBA.

The combined result has been millions of dollars in uncollected water and sewer revenue over the years, which has greatly hamstringed Jackson's ability to service its bond indebtedness, much less make needed infrastructure repairs.

At a press conference to announce a fact-finding investigation, council President De'Keither Stamps of Ward 4 said the council is considering hiring outside counsel to help the city's legal department with the council-led probe.

"If personnel have been doing things inappropriately, you'll be amazed at how fast they start doing things appropriately once they realize that accountability is on its way," Stamps told reporters.

After a closed-door briefing from Raftelis' consultants on March 5, city council members returned to open session and voted to launch an investigation. Ward 7 Councilwoman Margaret Barrett-Simon referenced the recent arrest of two Jackson police officers as one reason she wanted to move forward with an inquiry. On March 2, the Jackson Police Department announced the arrests of JPD rookies Willis Thomas and Rodney Vaughn, on two counts of grand larceny.

"Earlier the chief's name was mentioned and the fact that he had a problem in his department. He immediately acted on it and he earned even more respect for taking such swift action," Barrett-Simon said, referring to Chief Lee Vance.

The council does not have subpoena power, but Stamps said the aim of the investigation is "getting the human element out of the (WSBA) process as much as possible."

Although the council went into executive session to discuss personnel issues, the council did not take action against specific individuals for their roles in possible corruption. The Raftelis report recommends that the City implement "a series of improved standard operating procedures and oversight procedures for common business practices such as calculating and applying adjustments, logging and verifying work orders, and collections best practices."

Mayor Tony Yarber did not attend the special March 5 council meeting, but responded in a press statement taking credit for the Raftelis findings: "The council is within its rights to order an investigation. The Yarber administration recommended to the council that Raftelis be engaged and conduct an in-depth study of the project. Upon confirmation by the council and immediately upon taking her position, public-works Director Kishia Powell recommended an in-depth audit of all the processes and procedures within the department to ensure that the taxpayers were receiving all revenue from their largest enterprise: water."

The fact that WSBA is the city's biggest revenue generator makes the findings of the Raftelis report worthy of even more handwringing. Raftelis' briefing to the Jackson City Council on the City's water infrastructure problems last week was like watching a physician deliver a crushing, but not entirely unexpected, prognosis to a patient who's been experiencing chronic symptoms for years.

That prognosis: Unless the city finds a way to cut down on expenses, WSBA customers will likely face yet another rate hike.

"There is significant uncertainty regarding the level of metered consumption and magnitude of capital and operating costs going forward for the water and sewer system," Raftelis' report states.

"Given the size of the revenue shortfall in the out years, the City will need to restructure and may need to raise its water and sewer rates, so the City should begin focusing on rate planning and structuring."

The City asked Raftelis consultants to identify revenue problems based on the symptoms found through the data analysis and detailed on-site analysis that revealed that many water customers continue receiving services despite not paying their bills on time, if at all. It also found that the city has a large amount of uncollected revenue from the number of delinquent accounts or those with large balances.

However, the City does not have a good system to collect unpaid or large bills, the consultants note. Water accounts are coded by letter. For example, G-coded accounts refer to accounts associated with a government entity. E-coded accounts are reserved for emergency facilities such as hospitals and chronically ill customer for whom a water disconnection could jeopardize their health. The E-code lets the water department know not to disconnect those clients' water.

The City's E-coding has no supervision, however. Anyone can go into the system and add an E-Code without any oversight and the WSBA has no system for verifying that customers in fact have health problems. In October 2014, the Jackson Free Press reported that the city had more than 1,100 E-code accounts totaling $2.2 million in water fees.

Depending on how you look at it, the city is either facing a $1 billion infrastructure bill or, if you're an elected official, Jackson has a billion-dollar investment opportunity in the coming years.

On March 6, the public-comment period began for the 1-percent sales-tax infrastructure master plan, which a 10-member oversight commission helped develop with input from Raftelis.

In January 2014, Jackson voters agreed to impose an additional sales tax of 1 percent on certain purchases. Forecasters said the tax would generate between $12 million and $18 million per year or $300 million over the lifetime of the tax.

Yarber told the Jackson Free Press he does not have a final tally of revenues from the tax but that the city is averaging $1.2 million per month, which works out to be $14.4 million over the course of the last year. Yarber added that the commission is looking to spend $60 million on infrastructure projects. Although the money is welcome, it represents a minute portion of the city's infrastructure needs, which include the $400 million consent decree with the U.S. EPA.

In addition, the city is struggling to meet its debt service, which will increase over time as revenues decline, information from Raftelis shows. Hendrix wants Yarber to extend the public comment period for another two weeks.

See a full archive of coverage about Jackson's water woes at jfp.ms/water. Watch for Part II of "Troubled Water," R.L. Nave's series on the city's water-contract saga, on April 1.