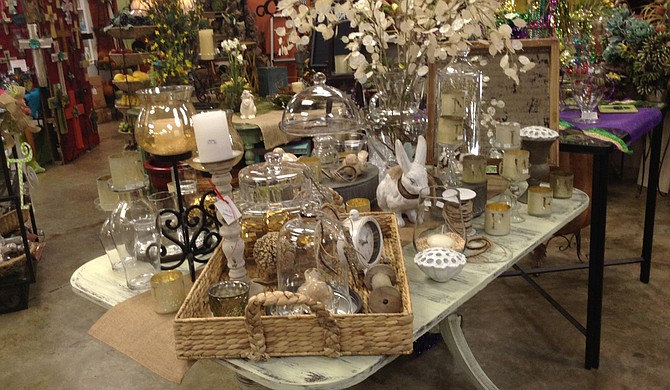 The Pine Cone gift boutique (1220 E. Northside Drive, Suite 220) opened its new home in Deville Plaza next door to Deville Camera yesterday. The Maywood Mart store will remain open through the end of March before everything moves to the new location.

To help reduce inventory ahead of the big move, the Pine Cone's Maywood location is holding a 50-percent-off sale on select gift items throughout the store, including picture frames, jewelry, scarves, tote bags, shoes, hats and more. The store also has a selection of regularly priced Peter's Pottery and Easter decorations.

Soul City Hospitality, a local food-hub venture that a handful of activist restaurateurs founded this year, has connected Choctaw Fresh Produce with Broad Street Baking Company for the first of a series of food-access promotions and partnerships. The project aims to increase the availability of high-quality, fresh produce in Jackson. Customers can buy fixed-price shares of the Choctaw Tribe's weekly harvest and receive a box of freshly picked fruits and vegetables each week during the growing season.

The cost of a share is $396, payable in advance online at www.choctawfreshproduce.com. The shares are limited to the first 100 customers. Each box of produce is approximately a 5/8-bushel box and includes about eight to 10 different items each week.

All Choctaw Fresh produce is pesticide- and chemical-free and sold fresh without any processing or additives. The CSA sample box for April will include collard greens, kale or Asian greens, radish, bok choy, romaine lettuce, baby spinach, carrots and green onions.

To make the arrangement convenient for metro Jackson customers, Broad Street (4465 Interstate 55 N., Suite 101, 601-362-2900), has agreed to be the designated pick-up site for the season. CSA customers can pick up their boxes each Thursday starting in April.

Jackson State University's entry into the Blueprint Mississippi Social Business Challenge did not place at last Thursday's competition at the state Capitol. However, the business, Mississippi Urban Organics LLC, will continue in its plans to create a student-run organic farm on campus to provide food for the community, Kenneth Russ, the group's faculty advisor, said in a release.

Students Sierra Jackson, 20, a junior business major from Huntsville, Ala., and Javis Jones, 20, a junior business major from Florence, presented the Mississippi Urban Organics LLC proposal to the judges. The two were winners of the JSU Social Entrepreneurship Business Plan Challenge last November, in which seven teams competed to represent the university. Each group had the task of putting their heads together for a creative solution to Mississippi's most pressing problems.

JSU's project would create a one-acre plot that will initially grow tomatoes and later expand to other crops. The farm would provide jobs for west Jackson residents, reduce urban blight and increase food security, Ramin Maysami, dean of the JSU College of Business, said in the release.

Blueprint Mississippi is an independent cooperative of organizations and leaders that conducts an objective review of Mississippi's economic opportunities and recommended actions for putting Mississippi in the place of greatest opportunity with support from the Mississippi Institutions of Higher Learning. The Blueprint Mississippi Social Business Challenge is open to any public university student. For more information, visit http://www.ihl.state.ms.us/msbc.