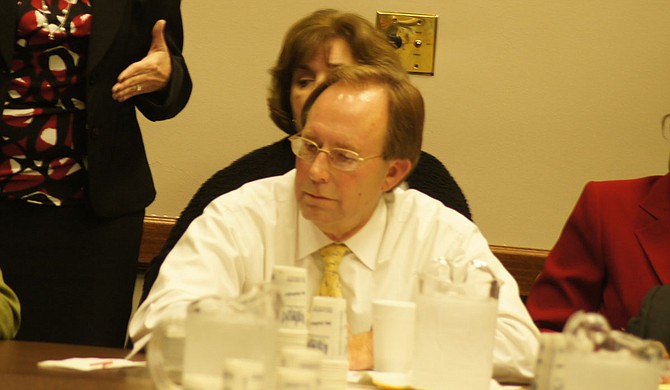 House education chair John Moore (R-Brandon) said the motion likely will not affect the bill's passage, but some amendments may be added before it goes back to the Senate. Photo by R.L. Nave.

Mississippi became the latest state that could replace the controversial Common Core State Standards after the Mississippi House passed a bill Wednesday that will assemble a commission to examine the standards.

The bill, which originated in the Senate, sailed through the House with a vote of 79-37, and waits on a motion to reconsider. House education chair John Moore (R-Brandon) said the motion likely will not affect the bill's passage, but some amendments may be added before it goes back to the Senate.

If it is passed, members of the House and Senate will work together to assemble a panel of educational professionals and parents to look at the standards, and may recommend new ones.

"They're commissioned to look at the standards and decide if they need to be changed," Moore said. "If they need minor changes, if they need major changes, or if we need to do a total rewrite, and then at that point in time they'll recommend to the state [board of education] what to do," he said.

Mississippi, along with more than 40 other states and the District of Columbia, signed on to the standards in 2010, which lay out what students are expected to know in math and English language arts in kindergarten through 12th grade. The Common Core coalition has fractured since then, and Mississippi is now one of several states that has introduced legislation to review the standards and consider whether to abandon them.

The state has been distancing itself from Common Core for months. Last summer, Gov. Phil Bryant called the standards "a failed program." In the fall, Mississippi cancelled its five-year contract with a group of states that developed Common Core tests known as the Partnership for Assessment of Readiness for College and Careers, although soon after the state signed an emergency contract to use the test for this spring because it was too late in the year to find a replacement exam.

Still, efforts to repeal the standards outright have largely failed. This year in Mississippi, opponents of the standards also rallied for the state to abolish the standards completely, but a bill that would have done that died last month.

Opponents of the bill say it is not doing enough to change the standards. Earlier in the year, conservative members of the Senate tried to pass an amendment to the bill that would have required the state board of education to follow the commission's recommendations instead of take them as suggestions. It ultimately failed.

The state's department of education no longer uses the name "Common Core" and instead calls them the Mississippi College and Career Ready Standards. If the latest bill becomes law, the Common Core copyright and any references will be removed from the state's standards, although some legislators questioned the legality of that action.

"It's already Mississippi College and Career Ready Standards, and what this does is delete the words "Common Core" out of the law. It will no longer be Common Core, that evil name that doesn't mean anything to anybody," Moore said.

This story was produced by The Hechinger Report, a nonprofit, independent news organization focused on inequality and innovation in education.