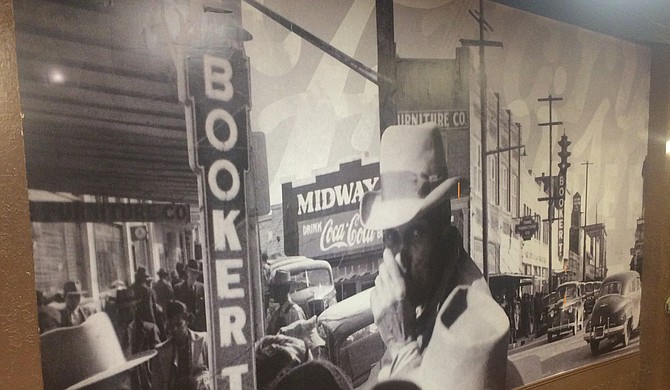 A mural on the wall of Johnny T's Bistro and Blues is made up of photographs of Farish Street in its prime. Photo courtesy John Tierre

Johnny T's Bistro and Blues, located in the Crystal Palace building (538 N. Farish St.) is a sister establishment to Norma Ruth's that will focus on quality steak, pasta, seafood and what Tierre says will be his own spin on bar food, including finger foods and shareable items. Everything on the menu will be made from scratch with fresh ingredients.

Norma Ruth's Chef Brian Myrick, who has also worked for Jackson's Char and Anjou restaurants, will be behind the selections at Johnny T's, as well.

Tierre says his new venture is intended to be a blues bar first and a restaurant second, offering a relaxed atmosphere and live entertainment. Johnny T's will offer a wide selection of craft beers from local breweries like Lucky Town, infused vodkas and daily specialty drink selections.

Johnny T's also features an outdoor patio space with seating for 36 people and an outdoor standing room with space for another 60, perfect for parties and beer gardens. Another space upstairs, Club 540, will have entertainment in a space with an open floor plan and contemporary furniture.

"I want to be part of the revitalization of Farish that never came to fruition," Tierre said. "I'm doing what Jacksonians need to do: Come back and invest in this area. Don't wait on corporations and big businesses."

Tierre's new establishment will have a soft opening July 3 and a grand opening July 11. Tierre is making plans for a grand-opening celebration with performances from national artists, though details are still in the works.

"Several years ago, we discovered that Brown and Williamson manufactured cigarettes for a company called Star Tobacco, but failed to pay what they were required to pay us under the original 1997 tobacco settlement agreement," Hood said in a release.

The original settlement requires the company to pay Mississippi for every cigarette it makes and ships to the state. Brown and Williamson dodged this payment by manufacturing cigarettes for Star Tobacco. The company then sold those cigarettes to Mississippians without paying the state.

During the investigation of Brown and Williamson's conduct, Hood also discovered other instances where RJR/B&W tobacco companies shortchanged the state. The $15 million represents principal and interest on what R.J. Reynolds and Brown and Williamson should have paid years ago. Hood brought the lawsuit at no cost to the state, as the tobacco companies agreed in 1997 to the pay the state attorneys' fees anytime it becomes necessary to go to court to enforce the settlement. Attorney Lee Young of Pascagoula led a team of private counsel with many years of experience taking on Big Tobacco.