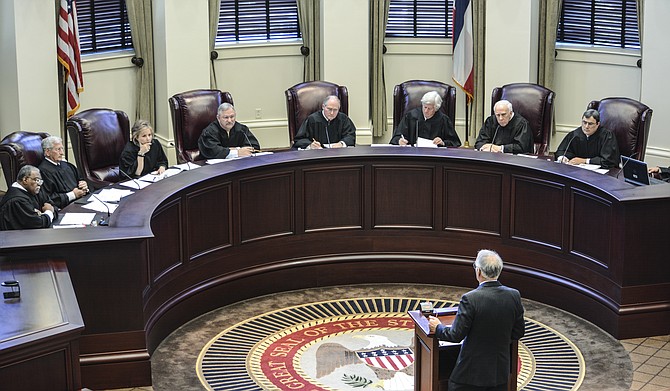 “This is a peculiar situation,” said Carey Varnado (pictured; addressing the court), an attorney for a Mississippi woman who wants to divorce her wife, considering the marriage-equality cases currently before the 5th U.S. Circuit Court of Appeals and the U.S. Supreme Court. Photo by Trip Burns.

Same-sex marriage cases have been in abundance as of late. But today, the justices at the Mississippi Supreme Court heard oral arguments for a different kind of LGBT equality issue: same-sex divorce.

“This is a peculiar situation,” said Carey Varnado, an attorney for a Mississippi woman who wants to divorce her wife, considering the marriage-equality cases currently before the 5th U.S. Circuit Court of Appeals and the U.S. Supreme Court.

Varnado and his client, Lauren Czekala-Chatham, claim the case represents a violation of the 14th Amendment due process clause—the same violation cited in recent cases over the validity of same-sex marriage bans.

The arguments differed slightly from cases before other courts regarding the right to marry, however.

“She doesn’t want to be married,” Varnado said of his client.

Czekala-Chatham married Dana Ann Melancon in San Francisco in 2008. In 2013, a judge in DeSoto County prevented the couple from getting a divorce because Mississippi’s constitution prohibits the state from recognizing marriages between same-sex couples.

The couple could get divorced in California, but Varnado argued the travel and the trial period to finalize the divorce would present a great inconvenience for his client. Plus, he said, Czekala-Chatham should not be denied the right to divorce as it deprives her of due process under the law.

“She is essentially trapped in the status of married,” Varnado said.

Matheney presented the same response—that the state has an interest in responsible procreation—as he did in the oral arguments for Mississippi’s marriage equality case, which is currently before the 5th Circuit.

Speaking softly, Justice King asked how a ban on gay marriage fulfills that purpose, shaking his head at times during Matheney’s responses.

Matheney argued that Mississippi’s marriage law incentivizes monogamy. But questions from the Mississippi justices, who are regarded as conservative, echoed those of federal judges in the recent marriage equality cases.

“Monogamy … Is that only something that’s found between heterosexual couples?” King asked.

Justice Jess Dickinson had the toughest resistance to the state’s arguments, repeating many times: “I can’t, for the life of me, understand why the state opposes this divorce.”

Dickinson said that, under the same-sex marriage ban, divorcing couples “seems to fulfill that purpose.”

Matheney argued that in order to grant a divorce, the state would have to recognize the marriage, which is prohibited by the state’s marriage ban.

If the purpose of the ban is to keep same-sex couples from being married, Dickinson said, than the law should allow for an exception in order to allow couples married in other states to get divorced.

After the hearing, Czekala-Chatham told reporters that, if the divorce is not granted, she will have to file as married with the IRS. She also said that traveling to California is an inconvenience.

“It shouldn’t have to happen,” Czekala-Chatham said.

The justices discussed issuing a stay until the U.S. Supreme Court rules on the marriage cases before it.

Varnado said that while his client would like to be divorced as soon as possible, he understands the court's rationale for considering a stay.