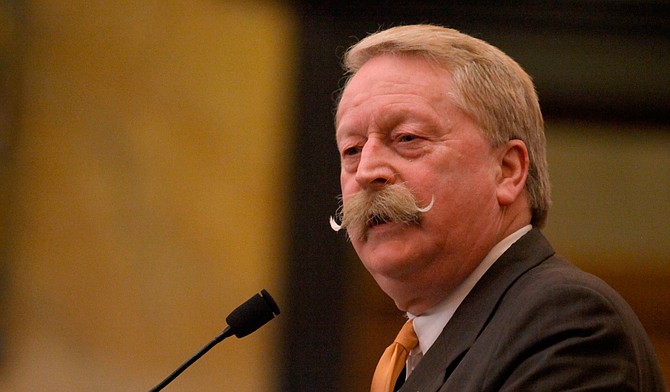 Speaker Philip Gunn, R-Clinton, and the House GOP leadership crafted House Bill 1629 to phase out the state personal income tax over the next 15 years.

Gunn's tax proposal would take $1.5 billion out of the budget. The bill passed the House 83-32 Wednesday, one day after its swift introduction and passage out of committee.

However, Democrats argued that the tax would be much costlier in the long run and offered a flurry of amendments to kill the bill or mitigate the potential losses. The amendments included requirements to fully fund the Mississippi Adequate Education Program for public schools, raise state employee wages and decrease the state sales tax on groceries before the tax-cut phase out begins.

Rep. Cecil Brown, D-Jackson, argued that the income-tax projections for this year are actually $2 billion and that inflation and other factors would eventually inflate the total cost of the cut.

Rep. Jeff Smith, R-Columbus, was not able to explain how the state would compensate for that budget cut but said that he believes the tax cut will help stimulate the state's economy.

"The money will be in people's pockets, and they will expend the money within the state of Mississippi, and there will not be any need for additional revenue enhancement," Smith said.

"It's a philosophical difference that we have," Smith responded when Brown charged that that Republicans' numbers don't add up. Smith admitted that he did not talk to any economists while crafting the bill.

In all, Democratic lawmakers introduced 10 amendments. Rep. David Baria, D-Bay St. Louis, offered one that would cause the tax cut to take full effect almost immediately instead of phasing it in over 15 years. While Baria stressed that he was serious about his proposal, Republican lawmakers like Rep. Mark Formby, R-Picayune, dismissed the idea.

Rep. Alyce Clarke, D-Jackson, wanted to require the state to develop a state lottery before it enacts the tax cut. Smith's response to that and just about every Democratic proposal was the same: "If you vote for this amendment, you might as well vote against the bill."

The bill now goes to the Senate where its fate is murky. Republican Lt. Gov. Tate Reeves is pushing his own bill that would phase out the business franchise tax and cost the state only $382 million.