Stinker Quote of the Week: 'Abysmal' 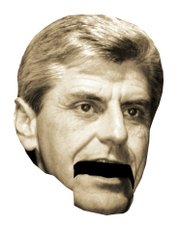 "It's disappointing that 62 members of the House of Representatives would vote to socially promote children who cannot read. With votes like this, it is little wonder that Mississippi's public education system has been an abysmal failure."

— Gov. Phil Bryant responding to a House bill to postpone implementation of a bill that would hold back students who do not demonstrate reading proficiency by the end of the 3rd grade.

Why It Stinks: Mississippi's public-education system may be challenged by chronic generational poverty and woeful underfunding, among other things, but one would be hard-pressed to say the state of education is abysmal in the face of so many success stories, which include Bryant.

Even if one were to concede Bryant on the point, the so-called "3rd grade reading gate" is hardly a solution to that failure. Like the public schools themselves, the 3rd grade reading program was essentially an unfunded mandate because implementation would have amounted to a tax increase for local schools. Pushing back full implementation seems like a sensible enough compromise with bipartisan support. The governor should embrace that spirit of cooperation instead of whining about not getting his way—and tarring all schools.