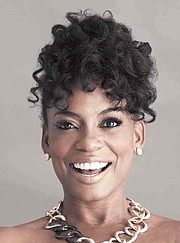 Mississippi actress Aunjanue Ellis, who has previously played important roles in works such as "The Help" and "Men of Honor," is now playing the main character Aminata Diallo in the six-part television miniseries "The Book of Negroes." The series premiered on CBC Television in Canada in January 2015 and will premiere on BET in the United States Feb. 16.

Ellis was born in San Francisco, Calif., and raised on her grandmother's farm in Mississippi. Her interest in acting grew out of performing in Easter and Christmas programs at her family's church, New Home Baptist in McComb.

"I think the church is driven by call and response, and I was always moved by the idea of being able to communicate an emotion and get people to respond to it," Ellis said. "Later I started auditioning for plays at school and college and just kept following that path."

Ellis attended Tougaloo College and later transferred to Brown University, where she earned a bachelor's degree in African American studies, while also studying acting with Professors James Barnhill and John Emigh at the college. She went on to study acting in the graduate acting program at New York University. One of her first major roles was the part of Ariel opposite Patrick Stewart as Prospero in the 1995 Broadway revival of William Shakespeare's "The Tempest."

When Ellis heard about "The Book of Negroes" and looked into it, she immediately knew that she wanted to be part of it.

"I had read about the upcoming series and thought it sounded like it would be an amazing piece of television," Ellis said. "I researched it and made sure to read the book—which is amazing—and then started asking my agent about getting involved. From there I talked to the director and auditioned for a role, and ended up coming into the lead role."

"The Book of Negroes" tells the story of Aminata Diallo, who is kidnapped by slavers at the age of 11 from her village of Bayo in West Africa and sold in South Carolina. The story follows Aminata as she is separated from her husband and daughter and escapes from her owner during the chaos of the American Revolutionary War.

Later, she does work for the British as a midwife and teacher, earning her a place in the titular "Book of Negroes," an actual historical document of some 3,000 freed African American slaves who requested permission to leave the United States in order to resettle in Nova Scotia. The book details her time in Nova Scotia, her joining a group of settlers in establishing the country of Sierra Leone, and her eventual journey to England to present the account of her life so it may help abolish the slave trade.

"I got the role of Aminata by a miracle, I would say," Ellis said. "The character is a woman I feel so many would root for knowing her story. The series captures her life after escaping slavery, all the people she meets along the way, her children, her journey. Aminata is a feminist, modernist and futurist. She's a warrior who can't be bowed, an artist who wanted to write her own story, her family's story, independently. I fell in love with her and the character, and playing her changed my life."