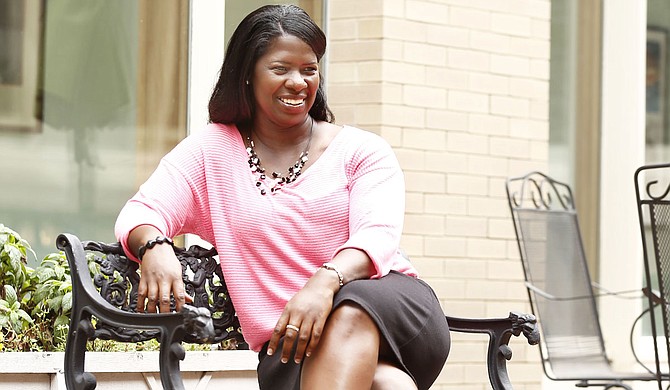 Merchell Pittman, a program support assistant at the G. V. (Sonny) Montgomery VA Medical Center, says some of the greatest lessons in her life have come from her nearly two decades of military service. "I learned leadership, I learned to supervise and manage, and I gained a great amount of professional development from my time in service," Pittman says.

Pittman's grandfather, Marcus Pittman, was a World War II veteran, and her uncle, retired Chaplain Col. Jim Luke Pittman, was command chaplain for the U.S. Army Medical Command at Fort Sam Houston in San Antonio. Pittman was born in Laurel and raised in Sandy Hook, Miss., and attended West Marion High School in Foxworth. She obtained an associate's degree in microcomputer information technology from Hinds Community College in 1992 before she enrolled at the University of Southern Mississippi, where she received a bachelor's degree in business administration in 1995.

At USM, Pittman joined the ROTC for the U.S. Army. She enlisted after graduation and was commissioned as a second lieutenant on Aug. 4, 1995. On June 2, 2006, Pittman entered her first deployment to Tallil, Iraq, for Operation Iraqi Freedom. She returned to the U.S. after one year and joined the VA Medical Center in 2008, working as an office automation clerk and transcription monitor before transitioning to the credentialing and privileging department after about four months. In 2011, the army deployed her to Shindand, Afghanistan, for Operation Enduring Freedom. While deployed, Pittman furthered her education by enrolling in online courses for Columbia Southern University in Orange Beach, Ala. She eventually earned a master's degree in organizational leadership in 2014.

After 20 years of service, Pittman retired from active duty in the Army on Sept. 30, 2014, for medical reasons. After her retirement and treatment, she returned to the VA in February 2015 as the program support assistant and coordinator for the center's institutional review board, working together with doctors looking to do medical research at the VA.

In February of this year, Pittman was a speaker at the Veterans of Foreign Wars' Post 5393 in Columbia, Miss., as part of the organization's Black History Program. Pittman discussed the role of women in the military, her own experiences in Iraq and Afghanistan and barriers for women in service, especially for young women.

"The military was good to me, and the military is transitioning in a positive direction where women in service are concerned," Pittman says. "The first two women who completed the Ranger training program recently are proof of that. That school is extremely hard, and for two women to show they can do it is just an awesome accomplishment and a step in the right direction."