Conkrete Sneaker Boutique, Public Wi-Fi and the Home of the Future, and Fall Workshops 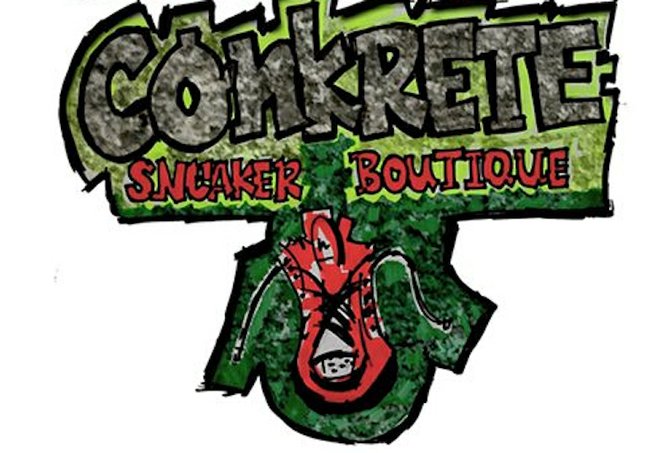 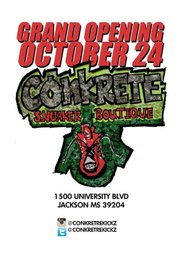 Conkrete promises to bring something outside of the usual shoe-store experience to Jackson while also helping to build up the community.

In August 2013, a local personal trainer took the first step to pursue his dream of opening a sneaker boutique in west Jackson. He turned to crowd-funding—the practice of funding a venture by raising small amounts of money from a large number of people, typically through the Internet. Though he didn't raise the $20,000 he initially aimed for, the amount he received from the community was still enough to make his dream possible. Now, on Friday, Oct. 24, Conkrete Sneaker Boutique will see its grand opening.

Conkrete promises to bring something outside of the usual shoe-store experience to Jackson while also helping to build up the community. Conkrete will offer exclusive sneakers unavailable anywhere else, in addition to socks, T-shirts, hats, watches and other fashion items. The store will employ people from the community and provide internships to the students of JSU's School of Business.

The boutique, located on 1500 Perry Road (also known as University Boulevard), will open its doors from 10:30 a.m. to 7:30 p.m. on opening day. The grand opening will feature a DJ, refreshments and special promotions all day.

The owner has not yet determined what the store's regular hours will be, but the boutique will be open Tuesdays through Saturdays. For information on Conkrete Sneaker Boutique, check out the store on Facebook, Instagram @conkretekickz, or call 769-243-6799.

Come the end of this year, Comcast plans to bring 200 public Wi-Fi "hotspots" to Jackson, which customers can use to connect with their laptops or other mobile devices, the Clarion-Ledger reported.

The company plans to place the hotspots in heavily trafficked areas such as campuses, parks and outdoor shopping centers, though details on specific locations have not been revealed.

In addition to the Wi-Fi announcement, Comcast also recently unveiled a "smart home" in which the company's cable, Internet and home-security features are integrated into what it calls the "home of the future" via cloud-based technology.

Cloud integration allows the owner of a smart home to control the TV, turn on lights and appliances, operate thermostats, water plants, lock and unlock doors and windows and even monitor the house. All those functions can be performed via touching an LCD touch screen panel or remotely on a computer, tablet or smart phone.

The smart home also features EcoSaver, a cloud-based program that learns the unique heating and cooling patterns of a home and makes automatic and incremental adjustments to the thermostat based on real-time weather data, the thermal characteristics of the house and the preferences of the occupants.

On Friday, Oct. 24, Tulane University's Madison Campus (2115 Main Street, Madison) will begin hosting a special series of Friday fall workshops designed to inform the residents of the Metro area about a variety of topics, ranging from grant writing to basic computer skills.

A Tulane professor will lead each session. The workshops will meet on Fridays from 10:30 a.m. to 1:30 p.m., and there is a $10 cash registration fee per session.

The first workshop is called "Getting to Know Your iPad." It will discuss the similarities and differences with each iPad generation, how to set up and customize the iPad and how to use the app store, which will cover installing an app and creating an apple ID. Participants need to make sure that the iPad is up to date (iOS 6, 7 or 8) and fully charged.

On Nov. 7, the workshop will be "Introduction to Excel," which will teach attendees the creation of spreadsheets by entering texts, values and formulas; the use of templates and built-in functions; editing and formatting spreadsheets; and Microsoft Excel shortcuts and toolbars. After attending this workshop, participants will have the required skills to create spreadsheets from a template and to edit an existing Excel spreadsheet.

The final fall workshop, "Introduction to Grant Writing," is on Nov. 14, and will outline an introduction to successful grant and proposal writing. This workshop will touch on a variety of areas including idea generation and development, identifying potential sources of funding, targeting your audience, budgeting, cover letters and engaging the community's support.

To register for a workshop, contact Tulane's Madison Campus at 601-605-0007 or visit the school's website at www.scs.tulane.edu/campuses/madison.