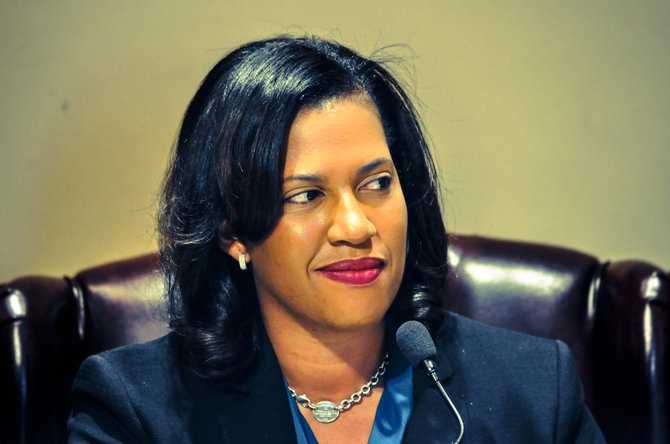 As the city's public works director, Kishia Powell will earn $150,000 per year—$3,000 more than the mayor—to help oversee a federal consent decree that requires the city to fix its sewers so they will stop discharging untreated wastewater into local rivers, which could come with a price tag of as much as $400 million. Photo by Trip Burns.

Under the contract, Raftelis will perform a rate-sufficiency study, assist with the development of the one-percent sales-tax master plan and review part of a 2013 contract the city signed with German conglomerate Siemens AG. The Siemens deal includes the installation of new digital water meters and a new billing system. The contract includes a “performance guarantee” of increased water revenue for the city. Powell said Raftelis would analyze that portion of the Siemens contract.

The audit is likely to result in higher water bills for ratepayers. Raftelis is one of a handful of national firms specializing in water and sewer consulting. Ninety-nine percent of the firm’s clients are municipal utilities, and approximately 90 percent of Raftelis’ work involves setting water and sewer rates. In many other cities where they have worked, including New Orleans, Birmingham and Baltimore, where Powell oversaw the Water and Wastewater Bureau, Raftelis’ audits have led to higher bills.

“From city to city to city, it was always a rate increase,” said Ward 6 Councilman Tyrone Hendrix about Raftelis.

Powell said that Raftelis’ purpose is not to raise rates, but to help project revenues in the event that cities choose to implement hikes; that decision is up to the city council, she said. Jacksonians are already dealing with increases passed as part of then-Mayor Chokwe Lumumba’s budget this time last year.

Still, the city has fallen about $12 million short of the roughly $80 million in water revenue projected for the fiscal year 2014, Powell said. As a result of the revenue shortfall, the city is unable to meet certain provisions of its bond obligations. In addition, the city is under a federal consent decree to upgrade its wastewater disposal system, which could cost as much as $800 million.

“There are cities around the country that are much larger that have a billion-dollar consent decree, and their rates are three times what we have, and they have a much larger population,” she told council members. “I think all things considered, you will need to raise rates.”

In Baltimore, which the U.S. Environmental Protection Agency slapped with a $940 million consent decree in 2002, residents in that city of 621,000 pay about $800 per year for their water. However, 105-square-mile Jackson has nearly a quarter more land area than Baltimore, which has 81 square miles.

An affordability analysis is not part of the Raftelis analysis, although Powell said such a review, which would be costlier, could come later.

At a special meeting of the city council this week, Yarber said despite the approval of the $90 million Siemens contract in March 2013, at the behest of then-Mayor Harvey Johnson Jr., the city lacks the expertise to make sure that the city is getting the bang for its buck that Siemens promised for the upgraded system.

That process has been a slog as the city and its customers have had to work out bugs in the systems, which has at times resulted in eye-popping water bills. Some of those bills have been errors, while others have come about as a result of more accurate meters, city officials say.

Mark Inbody, the project manager with Siemens, said the old, aging meters were not reading correctly, but that new devices are capturing ratepayers’ full consumption.

“Now, you have an accurate picture of what you’re using,” Inbody said during a presentation in Jackson last week.

In addition, a new bill system, which has yet to come online, will enable homeowners to track their water consumption in real time and alert them of leaks that may be driving their bills upward.

For the actual installation, Siemens subcontracted with Jackson-based MAC Consultants LLC, which has put in roughly 17,000 of the 64,000 new meters so far and plans to complete the project in about one year.