Yarber, Council Push to Ban the Box for Convictions 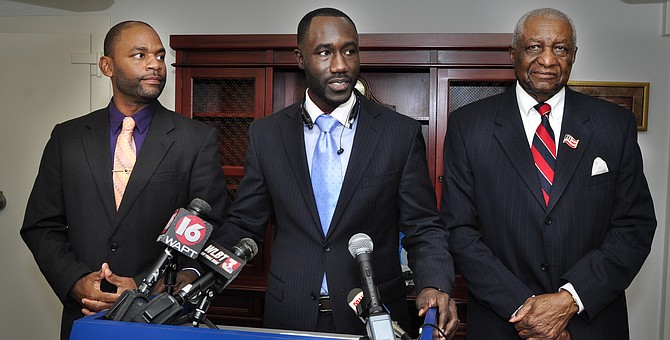 This morning, flanked by Ward 4 Councilman De'Keither Stamps (left) and Ward 5 Councilman Charles Tillman (right), Mayor Tony Yarber announced that the city would look to end the practice of asking about applicants' criminal records and to encourage public and private employers to do the same. Photo by Trip Burns.

During his campaign for mayor earlier this year, Mayor Tony Yarber talked about his buddy named Will. The then-candidate explained that Will grew up with Yarber in the city's Sub 2 neighborhood and, from time to time, would call Yarber asking if he knew of any job leads.

If he didn't get a real job, Yarber explained, Will feared he'd have to resort to ways of earning a living that had previously gotten him in trouble with the law. Of course, having been in trouble with the law represents a huge barrier to employment for people like Will because so many jobs ask applicants about criminal convictions.

But where there's a Will, Yarber and members of the Jackson City Council want to make another way.

This morning, flanked by Ward 4 Councilman De'Keither Stamps and Ward 5 Councilman Charles Tillman, Yarber announced that the city would look to end the practice of asking about applicants' criminal records and to encourage public and private employers to do the same.

Yarber urged city contactors and landlords "to consider applicants on their merits first and not on their past mistakes." The City of Jackson's employment application asks, "Have you EVER pleaded nolo contendere (no contest) to or been convicted of a crime?" and the form has a place to check for felonies as well as misdemeanors other than non-DUI traffic violations.

It also cautions: "Conviction is not an automatic bar to employment. Each conviction will be judged on its own merit with respect to time, circumstances, seriousness, and as related to the nature of the position for which you applied."

Thirteen states have statewide so-called fair-chance policies that limit questions prospective employers can ask about criminal convictions at various stages of the hiring process. In another 17 states, local or county governments have implemented similar policies.

Such boxes are particularly problematic in Jackson, the largest city in the state with the nation's second highest rate of incarceration. Yarber said Jackson would be the state's first city to implement such a change.

Stamps, the council president, said the move would give people a chance to go forward and secure employment. While there are no immediate plans to introduce an ordinance, Stamps said the council is working with Yarber's administration on developing a policy.

Yarber said his legal department would draft an internal policy, hopefully by the beginning of 2015, and said he would be open to an ordinance from the city council. Tillman, a longtime educator, said the initiative is long overdue.

"In changing times, we have got to change," Tillman said.

I'm not sure if I totally agree with this. This is not like checking the African American box, where I have no choice but committing a crime was a choice and you should have to self identify. I would like to see the ordinance 1st and see how that is spelled out. Maybe the line should read, check here if you have been convicted of a felony in the past 3 years but not eliminate the question all together. Also, if a company does a background check, it will pop up (or it should), what's to stop them from not hiring them then. Until I see the policy, this will be a good debate.I also don't feel this is helping the unemployment rate here. Making people hire felons will not increase jobs. This is one that should be on the ballot, not exclusively left up to the judgment of the city council.

What I object to in these questions is the word "EVER" as in "Have you EVER been convicted of a crime?" That means if you were dragged in and convicted on shoplifting charges at 14 and you are 44 now, have a degree, married, and a family, then you have to repeat that sad past on a form. Enough already! Since the person is going to be a city employee, certainly each person can be checked by the police department for serious offenses. Just provide a statement on the form and a permission line with a space for their signature. I do not wish to see the city offer employment as Mayor Melton did to convicted felons who had recent felony convictions, including some who had committed their felonies while on the city's payroll! If you abuse the city's trust in you as a city employee and are convicted, then you should not be eligible to be rehired by the city. Drop the box.