Person of the Day: Wilma Mankiller 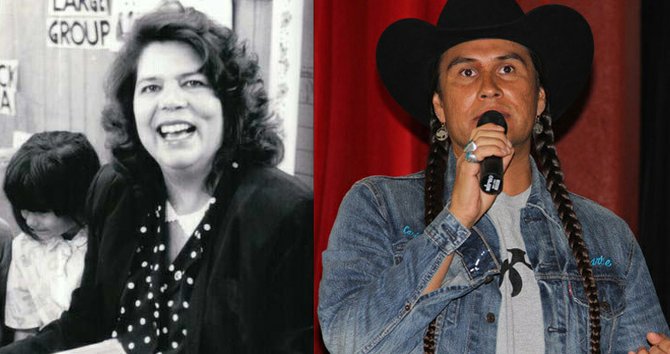 On March 18, Hope Enterprise Corporation and Hope Credit Union are partnering with the William Winter Institute on Racial Reconciliation to present an event in recognition of Women's History Month. The two organizations are hosting a screening of the film "The Cherokee Word for Water" at the Jackson Planetarium (201 E. Pascagoula St.). A Q&A session with the film's director and producer Charlie Soap and co-writer and producer Kristina Kiehl follows the screening.

"The Cherokee Word for Water" tells the true story of Soap and his late wife, Wilma Mankiller—who was the first woman chief of the Cherokee Nation—and their efforts to organize a rural Cherokee community in Bell, Okla., to construct a water line to provide running water to the area. The production of the film is a result of 24 years of effort on the part of Soap, Mankiller and Kiehl, a longtime friend of the couple.

Soap, 68, plays the part of a Cherokee storyteller in the film. He opens and closes the movie and puts the film's story into a historical context. Moses Brings Plenty and Kimberly Norris Guerrero play the roles of Soap and Mankiller, respectively. All work on the film was done locally in Tahlequah, Okla.—where the Cherokee Nation is headquartered—with many scenes filmed on Mankiller and Soap's own property.

Mankiller was born in Tahlequah, Okla., in 1945. Her family initially lived on her father's allotment lands of Mankiller Flats near Rocky Mountain, Okla. In 1942, the United States Army exercised eminent domain for military purposes, taking over the land of 45 Cherokee families, including the Mankillers, in order to expand a military base called Camp Gruber. The Mankillers willingly left Oklahoma under the Bureau of Indian Affairs' Indian Relocation Program and relocated to San Francisco in 1956, and later to Daly City.

Mankiller returned to school, first at Skyline College, and then San Francisco State University. She later received a bachelor's degree in social sciences from Flaming Rainbow University in Stilwell, Okla., and did graduate work at the University of Arkansas.

In the late 1960s, Mankiller joined the activist movement and participated in the Occupation of Alcatraz Island in 1969. Afterward, she spent five years volunteering for the Pit River Tribe. During the '70s, Mankiller worked with women's rights activist Gloria Steinem to fight for reproductive rights. It was during this time that she met Kiehl, also a women's rights activist. Together the three started an organization called Voters for Choice, which later merged with Planned Parenthood. It was Steinem who later encouraged Mankiller to run for chief of the Cherokee Nation.

Mankiller divorced Hugo Olaya in 1977 and moved back to Oklahoma with her daughters. Looking to help her own people, she took a job with the government of the Cherokee Nation as a tribal planner and program developer.

"The community in Bell didn't have running water, and Wilma wanted to see them get it," Soap said. "A lot of people were moving out of the area because of it, and even schools closed down. Wilma worked to empower the community by helping them build their own waterline with volunteer labor."

There was a small amount of money available from the federal government for the project, but it wasn't nearly enough. In addition, the government money was earmarked for Cherokee use only, which would leave out the minority of white residents in the area. Mankiller wanted to see that all residents of Bell got water, and so helped the residents raise money and build the waterline themselves.

Working together on the project started Soap and Mankiller's relationship, eventually leading to their wedding five years later in 1986.

The success of the Bell waterline project and Mankiller's leadership skills helped her be elected deputy chief of the Cherokee Nation in 1983 alongside Ross Swimmer, who was serving his third consecutive term as principal chief. Chief Swimmer resigned in 1985 when he became head of the U.S. Bureau of Indian Affairs. Mankiller succeeded him as the first female principal chief of the Cherokee. She was elected in her own campaign in 1987, and was re-elected in a landslide victory in 1991 with 83 percent of the vote. Mankiller stepped down as chief in 1995 due to health problems.

Mankiller died of pancreatic cancer in her home in Adair County, Okla., on April 6, 2010. She was 64. Shortly before her death, Soap and Kiehl promised that they would see their film completed.

"A week before Wilma died, she called me to her bedside and asked me to help Kristina with funding to finish the movie," Soap said. "I tried to say I wasn't a good fund raiser, but Wilma looked at me and said 'Don't tell me that. Promise me you'll get it done.' I said okay and promised we'd see it done. We went to work and in the following months we had managed to raise the money for the film. We got support from people who cared strongly about promoting women's leadership, and about the Indian story being told by Indians. People saw the importance of Wilma's story and were eager to see that it was told."

Soap hopes that the film will inspire viewers and show that the people in a community can work together to solve their own problems—a concept that the Cherokee call "gadugi."

"Wilma didn't want the movie to be about her, she wanted it to be about community," Soap said. "She wanted to restore people's faith in their ability to do things on their own within the community rather than waiting for other people to come in from the outside, which is very important for a community that has been continually lied to and neglected like she Cherokee Nation. She wanted to show women and men working together under a woman's leadership, which is traditional for Cherokee communities. Most of all, she wanted people to see that if we can do it, they can do it."

The screening for "The Cherokee Word for Water" will take place at 7 p.m. this evening (March 18) following a 6 p.m. reception. The event is free, but seating is limited. Donations to the Wilma Mankiller Foundation are welcome. For information call 601-944-9320 or email [email protected] Learn more about the film at cw4w.com.