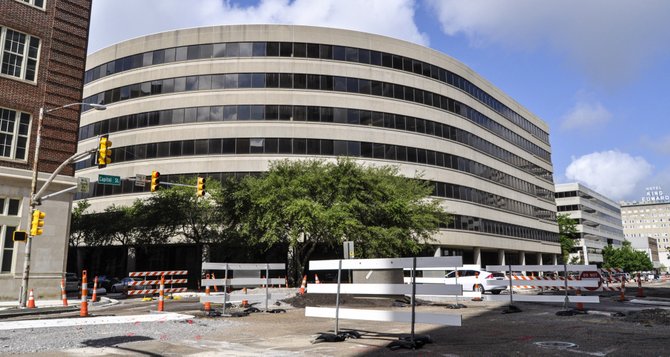 UMMC broke off negotiations with the Landmark Center's owners due to the prohibitive cost of moving unmarked graves from land off Lakeland Drive that the hospital needs for expansion. Photo by Trip Burns.

This story has been edited from its original version to reflect new information.

The saga to fill the long-dormant Landmark Center in downtown Jackson took several dramatic turns this week as one potential buyer dropped its bid and another suitor entered the picture.

The Mississippi Business Journal reported yesterday that UMMC broke off negotiations with the center's owners.

However, when UMMC realized that it may have spend millions of dollars to move unmarked graves from land off Lakeland Drive that the hospital needs for expansion, the hospital shelved plans to raze offices on the northwest edge of campus for a new hotel.

State offices signed off on the deal to purchase the Landmark Center, located at 175 E. Capitol St., in November 2013 for between $6.1 million and $6.5 million. The building has been vacant since the departure of AT&T, the space's former main tenant. UMMC planned to replace the roof on the seven-floor structure and make other renovations.

Today, the MBJ reported that the Hertz Investment Group, is interested in the Landmark Center but only if UMMC is out of the picture.

"We would do anything to help UMMC get to buy the building. But if that can't happen we might step in and be a player ourselves," Jim Ingram, Hertz executive vice-president and chief investment officer, told MBJ.

Downtown boosters hoped the purchase would help make up for the loss of potential office space caused when state officials snubbed the Landmark Center as the new home of the state Department of Revenue in favor of Clinton's South Pointe Business Center. An influx of approximately 300 or so new workers downtown, and the likelihood of more to follow as space in the Landmark filled, could have represented a significant economic boon to downtown.

Sickle cell anemia, which affects mostly African Americans, is an inherited, lifelong disease with no cure. It's the most common sickle cell disease, and it gets its name from the crescent or sickle shape of red blood cells in patients with the disease.

Normal red blood cells are shaped like a doughnut without a hole, and they move easily through blood vessels. However, sickle cells are stiff and sticky, and tend to block blood flow in small vessels throughout the body. This causes pain and organ damage, and raises the risk of infection and long-term fatigue. Patients in a crisis can experience pain for a few hours, or as long as a week or more.

Mississippians with sickle cell disease sometimes may have to wait at emergency rooms in general for as long as eight hours during peak hours—at night and on weekends—before doctors can treat their pain. However, a new clinic, opening today in UMMC's day surgery area, will allow patients to be seen within 30 minutes so that their pain—and other complications from the blood disorder, such as pneumonia or infection—can be quickly assessed and treated.

Between 2,000 and 2,500 Mississippians have sickle cell disease. About 600 to 700 receive treatment through the UMMC Department of Pediatrics. When those patients go to an ER, they compete for attention with trauma cases.

The new clinic will ease congestion at UMMC's adult Emergency Department as well as overwhelming traffic at the Cancer Institute clinic, located at the Jackson Medical Mall. Employees in the ED will be able to triage patients suffering a sickle cell pain crisis to the day clinic.

"It's very busy, and we don't have the resources to see the number of patients that need care," Dr. Bigelow, a professor in the Division of Hematology and Oncology in the Department of Medicine, said of the Monday clinic.

Patients at the Monday clinic do receive treatment for acute pain, but the clinic also handles referrals for eye and hearing examinations, vaccinations, and X-rays to help manage chronic conditions and the often-inevitable complications of sickle cell disease.

Buck and Bigelow will divide their time between the two clinics. Day-clinic staff will manage patients' comprehensive care with the help of UMMC psychologists, psychiatrists, pain management specialists and others in tune with their disease.

"Our goal is that a patient in pain crisis will be there no more than four hours," Dr. Bigelow said. "At the end of the day, we'll make a decision on whether they need to be admitted, or whether they can go home."