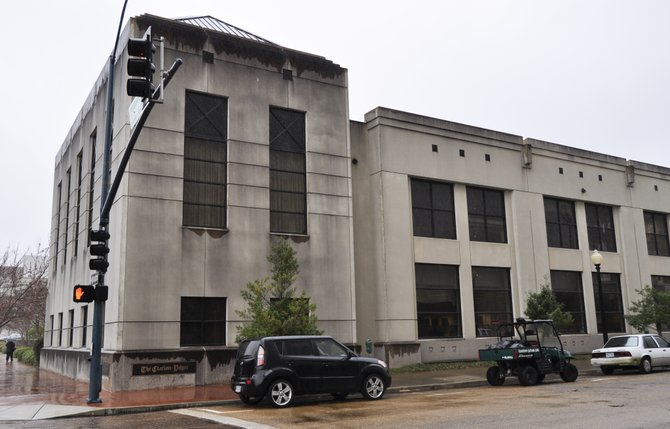 The Clarion-Ledger and its Virginia-based parent, Gannett Company Inc., are promoting a plan to fill the paper with the already-ubiquitous USA Today. So far, the initiative has paid off for Gannett. Photo by Trip Burns.

One month ago, five Clarion-Ledger's newsroom staff members, "armed" with $200 in one-dollar bills, spent a Sunday afternoon at the Flowood Walmart "to celebrate and promote the new, expanded" version of the daily newspaper by purchasing copies for shoppers.

An article that carried no byline and posted to the C-L's website on Jan. 12 reported that the new Clarion-Ledger would include 70 pages per week to, according to Executive Editor Brian Tolley, "return some heft to a newspaper that had grown smaller during the industry's turbulent times."

That heft comes from an initiative of C-L's parent Gannett Company Inc., launched first as a pilot program at six of its newspaper properties in October 2013, and then later expanded to nearly three dozen more markets, including Jackson. Known internally as the "Butterfly" initiative, the plan involves beefing up a number of its papers by adding a condensed version of Gannett's national flagship property, USA Today.

McLean, Va.-based Gannett, along with its local divisions, are calling the partnership all about "more of what matters to you." This message is also part of an all-out marketing blitz that includes new signage around its news racks and mailing out letters to former subscribers to lure them back in the fold.

"If you're looking for more of the local and national stories you care about, now is the time to check out The Clarion-Ledger," a letter to subscribers offering a 50 percent discount on the meatier C-L states. "And that's not all. We're also welcoming more national news, sports and entertainment coverage from USA Today. If it matters to you, you'll find the whole story here."

It is unclear how the strategy will translate into more local news in Jackson, which has not been immune to newsroom shrinkage despite being one of Gannett's most valuable properties. For Gannett, which owns 81 newspapers and 43 local TV stations, the intent is clear: boost profits.

Alliance for Audited Media, which audits newspaper circulation, signed off on the Butterfly distribution that permits USA Today to mix in local circulation figures with its own. AAM figures released in October 2013 show that for the audit period ending Sept. 30, USA Today had the nation's largest circulation, 2.88 million with combined print and digital weekday numbers. The 35 papers participating in the Butterfly initiative have a combined circulation of more than 1.5 million on weekdays and more than 2.5 million on Sunday, a Gannett news release said.

AAM data for individual properties are not publicly available, but as of March 13, 2013 the C-L's circulation was 64,400 on Sundays and 54,000 on weekdays. Those figures represented Sunday declines of 5 percent from the previous six-month period ending September 2012 and a 3.5 percent drop on weekdays in the same time period.

Soon after the announcement of the Butterfly initiative, the price of Gannett's stock also began to climb right from $25.09 per share right before Butterfly's launch in early October to above $29 right around the time the C-L staff was buying papers for Flowood Walmart shoppers in early January. This week, at press time, the stock was about $27.80 a share.

The circulation boost seemed to help stave off deeper losses in Gannett's publishing division, where revenues were down $944 million compared to the fourth quarter of 2012. The nearly $1 billion revenue drop was driven mostly by advertising revenue declines of 5.9 percent, which company executives told reporters resulted from a busier than expected political advertising sales during the presidential election.

Meanwhile, Gannett's expenses were 4 percent lower in the fourth quarter compared to the previous year, something Harker attributed to "ongoing expense reductions primarily from our efficiency efforts." The executives made no mention of layoffs, but in August Gannett laid off what USA Today reported at the time as "totaling a couple hundred jobs" at "some of its local papers." The Gannett Blog, which until it ceased publication Feb. 8 aggregated news about Gannett and other media companies, reported that 13 C-L employees were laid off. A month earlier, in June, Gannett had also bought Belo Corp., a Dallas-based owner and operator of newspapers and local television stations, for $2.2 billion.

Even though the Butterfly initiative is still in its early stages, Gannett thinks the program is working at least in terms of revenue. Robert J. Dickey, president of the U.S. community-publishing division at Gannett, said during the Feb. 4 call that "USA TODAY local content markets" are seeing a 3- to 4-percent improvement compared to markets not yet participating in the Butterfly pilot.

"We're very encouraged. On the other side, what's really exciting as well is that our starts (new subscriptions) have improved by about 8 percentage points prior to the launch. So we're not only seeing retention and acceptance of the price increase. We're also seeing former and new subscribers come back to us."