Does Uber Have a Dark Side? | Jackson Free Press | Jackson, MS

Does Uber Have a Dark Side? 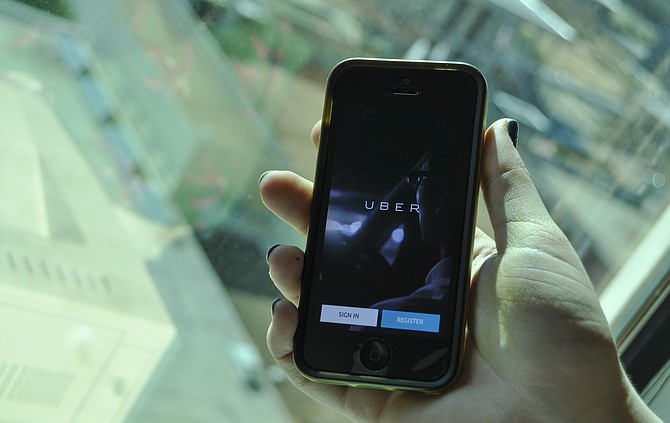 The ride-sharing app, Uber, has plans to change the transportation game forever. The company included Jackson in those plans as it expanded into the city with its UberX program, beginning Dec. 11, even as it is mired in international controversy.

The ride-hailing company, which uses an app that connects Uber members to Uber drivers, claims its success will lead to fewer people owning cars, as they will be able to use its service for all commuting. Uber allows people to order rides, based on their location, from Uber drivers; in the expanded UberX program, some of those drivers use their own personal vehicles instead of licensed limos or cabs.

But the company is drawing flak from various places, prompting Uber critics to urge users to delete the app.

For one thing, Uber founder and CEO Travis Kalanick has made a number of disturbing, sexist remarks since becoming part of the Silicon Valley elite—like when he called the app "Boob-er" due to his increased ability to woo women since Uber took off—that fall in line with how critics say that the company treats women in general.

The controversy isn't all immature, sexist speech and exploitation of women in advertisements—women say they are getting hurt in Uber-enabled encounters. Allegations range from two Uber drivers in Washington, D.C., one who allegedly choked his passenger and another accused of knocking a woman to the ground and raping her; to an Uber driver in Los Angeles who allegedly kidnapped an intoxicated woman and took her to a hotel room; to an Uber driver accused of sexually assaulting a woman in Seattle. Another is accused of raping a woman in Boston and another of raping a woman in India. One of the drivers in D.C. and the drivers in Boston, Los Angeles and India were arrested.

All of these accounts, which are not the only accusations of abuse against women by Uber drivers, took place within the last year.

When addressing the safety concerns of the service, Jackson City Council President De'Keither Stamps said the allegations don't differ all that much from the incidents that have occurred historically in regular taxicabs.

"You've got to keep the conversation balanced," Stamps said.

But it's not just these dangerous situations that anger women activists. It's the response from Uber representatives.

When Uber execs got wind of the choking incident in D.C.—in which police were called, but no charges were filed—Kalanick complained that the media suggested Uber was "somehow liable for these incidents that aren't even real in the first place."

Kalanick also stressed in an email, according to Gawker-owned site ValleyWag, that Uber should "make sure these writers don't come away thinking we are responsible even when these things do go bad."

Things got even creepier when Uber representatives started to react to women, mainly journalists, who reported on complaints about the app and wrote stories regarding its service.

Buzzfeed reported in November that Uber Senior Vice President of Business Emil Michael suggested the company spend $1 million on a team of researchers to "dig up dirt" on journalists who criticize the app in the media.

Michael directed his ire at one female journalist in particular, Sarah Lacy, the editor of the online tech-journal, PandoDaily, who has spoken out about Uber's questionable business practices. He has since apologized for the statement.

When contacted for a response to alleged smear campaigns against women who speak out about the company, Uber spokeswoman Kaitlin Durkosh emailed a statement: "We have not, do not and will not investigate journalists. Those remarks have no basis in the reality of our approach."

"This kind of growth has also come with significant growing pains. The events of the recent weeks have shown us that we also need to invest in internal growth and change. Acknowledging mistakes and learning from them are the first steps," Kalanick wrote without delving into specifics.

But some question how liable Uber could be for the problems, considering their background check for drivers might not be as airtight as they try to make it seem.

A Los Angeles NBC affiliate tested out Uber's application process, only to find that their test applicant—a reformed convicted felon with a rap sheet including burglary and criminal threatening—was approved to become a driver.

Ultimately, Uber's competitive advantage—and the source of additional criticism—has been its ability in many municipalities to circumvent rules that taxi services must follow because Uber runs as a "technology platform," instead of as a transportation service. In many places, for example, Uber avoids regulation including driver qualifications, vehicle inspections, insurance and ride fare.

Many argue this puts Uber at an unfair advantage over traditional taxi services and that it could run those cab companies out of business.

Such loopholes have left Uber—again, a technology company—not liable for injury of drivers or passengers in the case of an accident.

Stamps said this means Jackson must work to craft legislation to regulate ride-sharing. He said he doesn't know what this will look like, yet, because the technology is relatively new. "I'm trying to do more due diligence so I can have good info to make decisions on what direction we need to go forward," Stamps said.

Durkosh, the Uber spokeswoman, said 14 jurisdictions, including states like California and Colorado, have adopted legislation that regulates ride-sharing services.

In other states, legislation mandating regulations of ride-sharing technology has been met with a strong pushback. In some cases, lobbying on part of the technology community and Uber has influenced state leaders considering enforcing new laws.

In Illinois, Gov. Pat Quinn vetoed legislation that imposed regulations requiring drivers to undergo background checks, have at least a $350,000 insurance policy, and those who drove more than 36 hours in two weeks to acquire a chauffeur's license, among other requirements. The veto, which struck down the ride-sharing legislation that received 80 votes in the House and 46 in the Senate, came amid political pressure during a close gubernatorial race.

Uber critics worry that the company, which is worth $41 billion—up from $18 billion just this summer—has enough influence to affect how state leaders respond to evolving technology's effect on transportation safety and the business world.

To women who question whether or not they're safe in that world, company representative Durkosh said, "We take our commitment to women very seriously."