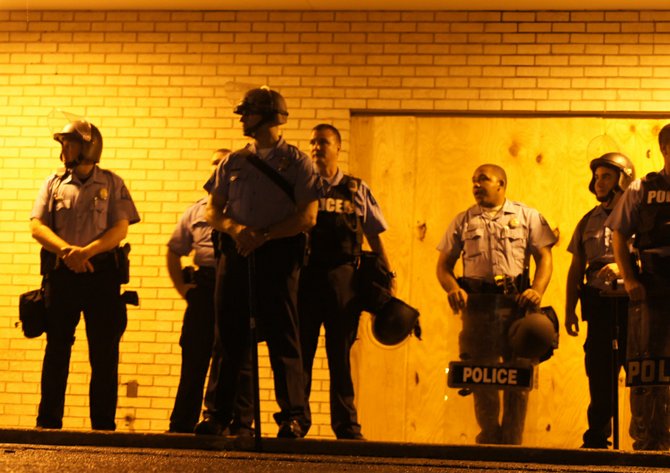 On the first day of a declared state-of-emergency in Ferguson, Mo., it rained on and on off all night.

The precipitation did little to keep people away from West Florissant Avenue, one of Ferguson's main arteries and the epicenter of daily protests that started the day after a white police officer shot 18-year-old Michael Brown six times, killing the soon-to-be college student.

As governors and presidents had done before, including in 1962, to quell riots started by the integration of Ole Miss, Missouri's Gov. Jay Nixon imposed a curfew and, eventually, activated the National Guard. Hours before the first curfew was to take effect, it was clear that a lot of people had no intention of going home. Some protesters took refuge from the downpours at the once-bustling and heavily policed QuikTrip convenience store and gas station that has since been looted and burned. Organizers, including attorneys from the National Conference of Black Lawyers, paced in front of the crowd and spoke through megaphones.

"If you plan to be in Ferguson past midnight, be prepared for anything," said one black woman with short, natural hair. Speakers gave out the telephone number to a free legal hotline for free counsel and bail in case anyone was arrested for violating the curfew. Jamilah Nasheed, an African American state senator who represents north St. Louis City, warned the demonstrators of mostly young black men and a few women that anyone taken into custody with outstanding arrest warrants or overdue child-support payments would not be able to post bond that night.

Most were undeterred. I stood near two men, both their faces covered with bandanas, standing nose-to-nose, rap-battle style, trading stories about friends who were beaten or killed by police. Those men represent part of the difficulty of coping with Ferguson.

After Mike Brown's killing, some Ferguson businesses were vandalized and looted before Good Samaritans decided to stand vigil and protect the stores from further damage. When that happened, there was a lot of talk that the looters were merely exploiting the tragedy and cared nothing about seeking justice for Mike Brown. Which is partly true. Of the thousands of people who poured onto Ferguson's streets each night, there were those who were angry about the death of Brown and want the white officer who shot him, Darren Wilson, to be charged.

Then there are those, like the men at QuikTrip invoking their friends, angry about constant police harassment, which was reinforced by the hyper-militarized response of the 50-man-strong Ferguson Police Department. And, finally, there were those people who were angry for any number of reasons, and the Ferguson protests provided an outlet for that anger.

At the darkened QuikTrip, Malik Shabazz, founder of the New Black Panther Party, urged demonstrators to start dispersing well ahead of curfew and re-assemble the following morning. Shabazz's appeal was not well received by everyone.

"Don't come out here and try to preach that sh*t to nggas that live this sht," one man angrily shouted in Shabazz's direction.

The sh*t to which the young man was referring includes a crushing police presence in Ferguson, which is two-thirds black but where African Americans account for 86 percent of traffic stops, 92 percent of police searches, and 93 percent of arrests, according to information the Missouri attorney general compiled in 2013. Whites in Ferguson were more often found with contraband, but still only half as likely to be arrested.

A policeman killed Mike Brown in Missouri just four days after a policeman killed John Crawford, 22, in an Ohio after a receiving a 911 call about a man walking around the store with an air rifle. That was two weeks after a policeman in Staten Island, N.Y., killed Eric Garner, 43, with a chokehold. The man who made a video of the incident claimed that Garner had broken up a fight before the police showed up. Two days after Brown's death, two policemen in Los Angeles shot and killed Ezell Ford, who was 25, mentally ill and also unarmed.

Together, the shootings have kept alive a conversation about black males' precarious right to exist in white America. And it also reminded us that if it could happen in these places, it can happen anywhere—including in Jackson or elsewhere in Mississippi.

A Matter of Training

Mississippians are paying close attention to the events in Ferguson.

For some, like James Meredith, himself the center of a storm more than 50 years ago when he became the first black person to attend the University of Mississippi, sees Ferguson as an example of America's troubled race history repeating itself.

"The thing that's happening in Ferguson, Missouri, is the most important thing that's happened for the black race, particularly young black males, since the 1930s in Scottsboro, Ala.," Meredith told me at the state Capitol, referring to the famous case of nine young men falsely accused of rape by two white women.

Understanding the historical significance of the Ferguson uprising is what drove a handful of activists from Jackson to go to Ferguson in support of protesters and observe organizing strategies being used on the ground to adopt in Mississippi if necessary.

Brittany Gray made two trips to Ferguson, the second tour consisting of street-medic training for people exposed to tear gas and helping connect protesters from the St. Louis area to national organizations that self-deployed. If the protests early on seemed disorganized, it's because many of the demonstrators are young, working-class people who have never been exposed to structured political movements.

"When things like this happen, it may take a while" to get organized, Gray, 28, said. "As much as the organizers were able to accomplish in seven days was impressive."

After numerous clashes with police in the first week or so, Ferguson has returned to relative normalcy. Gray, who has worked on local political campaigns in Jackson, said the next objective, besides pressuring St. Louis County prosecutors to charge Officer Darren Wilson with Mike Brown's murder, is to empower the residents of Ferguson through voting and other political activities as well as to require more transparency for the police, including possibly requiring dashboard and wearable cameras.

The Ferguson Police Department's crushing response to protests, that in the beginning came with military-grade vehicles and weapons, has also raised questions about the militarization of small-city police departments. Gray said Ferguson should also raise questions locally about how well Mississippi law enforcement agencies are trained, particularly to handle interactions with young people.

In making crime prevention a priority of his still-young administration, Mayor Tony Yarber has ruffled feathers by ordering stepped-up police roadblocks, deploying more officers to crime hotspots and dismissing a municipal judge he believed had gone too soft on setting bonds for what he considered heinous crimes.

Yarber recently named Lee Vance, a 27-year Jackson police veteran and longtime department No. 2, as the JPD's permanent chief. Before he made Vance's nomination official—the city council must approve the pick—Yarber said he wanted a wanted a chief who could connect with the community.

"We don't want a situation in Jackson where our police officers are untrained, not following protocol, and they aren't able to make the best kinds of decisions in a situation like that," Yarber told me when asked for his observation about the unfolding events in Ferguson.

Rankin County Sheriff Bryan Bailey has already started planning for worst-case scenarios, Steve Wilson of the conservative-funded Watchdog.org, reported Aug. 20. Rankin County is one of a handful of Mississippi law enforcement agencies that, like the Ferguson Police Department, have obtained surplus Mine Resistant Ambush-Protected vehicles through a U.S. Defense Department program that drew criticism in the aftermath of Ferguson

"Being Mississippi is the way it is and we're real pro-gun here, there's a lot of houses with high-powered rifles. There's been numerous incidents where people were threatening suicide and a vehicle like this could help us get an officer close enough to talk them out of it. I could pull right up to the house with this and not worry about my officers' safety," Bailey told Watchdog.org.

"I know an MRAP is overkill for public law enforcement, but I know that I don't have to worry about anything in Rankin County penetrating it."

It's unclear whether Jackson or Hinds County have procured any equipment through the Defense Department. Neither spokesmen Othor Cain of the Hinds County Sheriff's Department, Colendula Green of the Jackson Police Department nor the Mississippi Department of Finance and Administration responded to requests for information on those agencies by press time.

The activists who traveled to Ferguson say that the demographics of the capital city makes it unlikely that Jackson would experience the same kind of unrest resulting from a police-involved shooting.

"I think Jackson is a whole other animal. In Jackson, the police force matches the population," said Tyson Jackson, an organizer who lived in St. Louis for five years.

Jackson cited the May 2014 case involving off-duty Hinds County Sheriff's Deputy Joshua Adams who got into a deadly fight with basketball coach Justin Griffith, apparently over calls Griffith made during a 7th-grade basketball game.

Jackson said charging with Adams with murder within days likely kept any simmering tensions between citizens and the law-enforcement community from boiling over.

"The response was a community response. (Adams) was charged. We didn't have to wait. There was an immediate response," Jackson said.