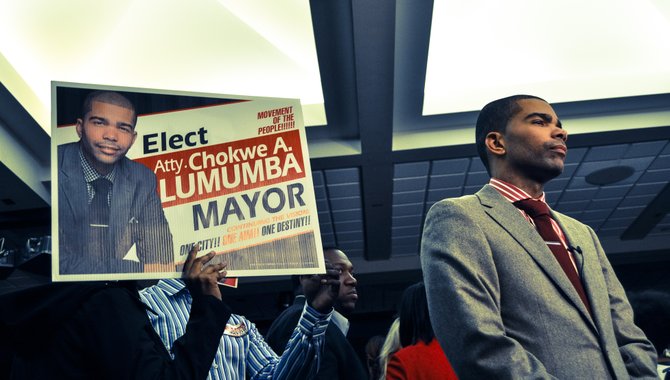 While canvassing door to door in south Jackson last week, mayoral hopeful Chokwe Antar Lumumba would take a few moments in between visiting with Ward 6 residents to talk about his vision.

Lumumba, the son of late Mayor Chokwe Lumumba, said at one point that it was his father's understanding of people's sufferings that allowed him to create progress during his short time in office. The son said he believes that he gained this same understanding while working with his father as both an attorney and an adviser, and it is this understanding that not only changed the City of Jackson but has also prepared him to stand and serve the people.

"I see the poverty. I see the criminal activity," he said. "... I see the conditions that people are suffering from in Jackson, and that is the experience that really helped prepare my father. It wasn't his tenure in City Hall that prepared him to be mayor. It was his understanding of the conditions that we suffer from. It was his preparedness and his willingness to stand on people's behalf. Jackson does not need a politician so much as they need an advocate. So that's what I am. I'm an advocate. I'm someone who is prepared to stand for the people."

A year ago when the idea of him succeeding his father, who then served on City Council, was first presented to him, Lumumba passed on the opportunity. "At that time, my view was that we had leadership in place that could sustain things, in my father," Lumumba said.

The candidate now says that although it was not his personal goal to run for City Council at that time, his father's passing changed everything, including his perception of himself as the mayor's son and a defense attorney to Jackson's next leader.

The last few months have consisted of several ups and downs for the 31-year-old—his father passed away Feb 25, his wife, Ebony, gave birth to their daughter, Alake Maryama, on March 18, and Lumumba decided to run for mayor sometime in between. While some people would need this time to adjust to the many changes, Lumumba sees it as a pivotal moment in his life in which he must come forward to make what he calls a personal sacrifice to serve the people of Jackson by carrying out the vision that his father previously set forth.

This vision includes the continuation of the Malcolm X Grassroots Movement and the People's Assemblies, open forums in which Jackson citizens can voice their ideas and opinions about the city's issues and propose solutions to those in power. Lumumba has adopted the maxim his father coined, "one city, one aim, one destiny," throughout his campaign. The maxim symbolizes for the son the idea that the city can one day be united in advancement and prosperity.

Lumumba grew up in northwest Jackson and attended St. Joseph Catholic School for middle school, then Murrah High School, graduating from Callaway High School and Tuskegee University in Alabama. Inspired by his father and against the wishes of his mother, Nubia, who wanted him to go into a more lucrative line of work than his father, he studied law at Thurgood Marshall Law School in Houston before joining Freelon & Associates as the firm's managing partner.

"One thing I would see as I got older was the many people who seemed to be shuffled in and out of the system, and it just didn't seem that everybody was guilty," Lumumba said. "It occurred to me later on that sometimes people don't have the financial means to defend their innocence."

Lumumba says much of his experience came from his work with the law firm. He aided in the clemency petition for the Scott Sisters in 2006, a case in which two sisters, Jamie and Gladys Scott, were convicted of orchestrating an armed robbery in Forest, Miss., and given life sentences in 1995. After an outcry of criticism that the punishment was too severe, several civil rights activists, including his father, petitioned for an appeal to their sentence, which Gov. Haley Barbour eventually suspended in 2010.

The son has also said that he advised his father during his city council tenure, his 2013 mayoral campaign, and his seven months in office. But he didn't always agree with him.

"I admired my father most, but I also disagreed with my father at times," Lumumba said, pointing to a disagreement over a development near Lake Hico that the senior Lumumba supported for the possibility of new jobs, but the junior Lumumba and the People's Assembly rejected. He also strongly disagreed with some of his father's appointments at City Hall, vowing to fire some of them. He wants people who are making achievements in their jobs and are working well with the people around them.

At several mayoral forums and debates, Lumumba has talked about his plans for solving issues related to crime, infrastructure and jobs. In regard to questions concerning the Hinds County Detention Center, he said he wants to cut down on transferring inmates to Raymond due to the high costs and look into repairing the city's own jail. He also wants a citizen review board to improve the relationship between police officers and citizens. He said providing opportunity is the best solution to city crime and wants to do that by turning infrastructure problems into economic opportunity. "Wherever you have high poverty, you have high crime," he said at several mayoral forums.

Lumumba said recently that he is working to create a Human Rights Commission that would provide protection to a variety of minorities, including LGBT citizens. He also supports an anti-discrimination city ordinance with explicit protection of citizens from discrimination on the basis of sexual orientation or gender identification. "It's always been a stance of the Malcolm X Grassroots Movement, human rights for human beings, and we're very serious about that end," Lumumba told the JFP. See page 9).

In regard to education, Lumumba has said he believes that school-board members need to be elected so that they may be directly accountable to the citizens of Jackson, who have the right to remove members who are not doing their jobs. He is generally against charter schools because he says that it has the potential to rob Jackson Public Schools. He is also interested in implementing a citywide educational campaign, which would invite professionals to visit classrooms.

Lumumba has also said that another important part about the People's Assemblies is that it helps the people know they are being heard, stressing that a willingness to listen to everyone's opinion fosters better relationships and moves the city towards unity.

"We believe in serving all of Jackson. We really do believe in 'one city, one aim, one destiny,'" Lumumba told the JFP in south Jackson. "What people will find is that I'm not someone who thinks he is a king, that the only decisions which are good are decisions which come from me. I am willing to sit down with people. ... I think that's critical. Now that doesn't mean we're always going to agree, but when you are at least willing to receive everyone's input—that itself fosters a better relationship."

Read more about the candidates at jfp.ms/jxnmayor.