‘Budapest Hotel’ is a Grand Time 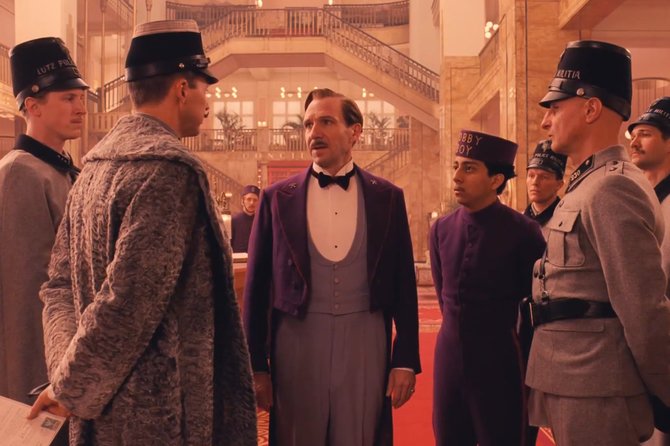 Tony Revolori and Ralph Fiennes give nuanced and imaginative performances in “The Grand Budapest Hotel.”

The rare talent of writer/director Wes Anderson is back at work with his latest film, "The Grand Budapest Hotel." The 44-year-old Texan uses his uncanny ability to stylize the imaginary past with whimsical visuals, acute absurdity and a dash of tongue-in-cheek.

Set in a fictional resort town in between-the-wars Europe, the film focuses on hotel concierge Monsieur Gustave H. (Ralph Fiennes). As the face of the hotel, he knows everyone, and everyone knows him. With new lobby boy Zero Moustafa (newcomer Tony Revolori) in tow, he anticipates his guests' needs and even gives himself when desired—specifically, to the elderly madams. Gustave, in line with Anderson's tendency to create characters with oddities, is obsessively all knowing and hands on. He speaks with dexterity, and Fiennes, not missing a single nuance, absolutely nails the part. It may be the defining role of an already brilliant career, and he will surely gobble up accolades.

The film opens on a young writer (Jude Law) as he meets, dines and converses with the older Zero (F. Murray Abraham). Older Zero enlightens the young writer with tales of the hotel, Gustave and how he, Zero, landed there. Then, the film zips back in time, and the older Zero narrates the  ensuing adventure.

The film's aesthetics are a blitzkrieg. Blasted by colors, the audience engages in a trippy rainbow hopscotch of surrealism. But thankfully, the plot begins to progress and unfold. A frequent hotel guest, the 84-year-old Madame D. (Tilda Swinton), is murdered at home just days after leaving the Grand Budapest. And so the murder mystery begins! Gustave, with Zero in tow, of course, shows up to pay his respects. Deputy Kovacs (Jeff Goldblum), Madame D.'s lawyer and estate executor, announces that she recently amended her will, but the amendment's whereabouts are unknown. Ownership of her beloved painting "Boy with Apple" is granted to Gustave—to the dismay of her mischievous son Dmitri (Adrien Brody). Fearing legal obstruction, Gustave and Zero decide to steal the painting and return to the Grand Budapest.

As a true original in today's cinema, Anderson is a filmmaker with as many detractors as supporters. Audiences have a love 'em or hate 'em affair with his works. But overt film snobs can't get enough of him. And while not in the film snobbing business, I also like his films. They are refreshingly imaginative, neatly but not nauseatingly quirky, and strangely reminiscent of one's dreams. His 2001 film "The Royal Tenenbaums" would be on my top 10 films list—if I ever sat down to write it out.

Discernibly fake special effects are deployed throughout the film; you will either enjoy or scoff at these classic Anderson mechanisms. Gustave lands in prison, but quickly escapes with the help of Zero and Zero's dessert-making love interest Agatha. Evading capture from Inspector Henckles (Edward Norton) and certain death from Dmitri's henchman Jopling (Willem Dafoe), Gustave and Zero aimlessly worm their way around the countryside and Grand Budapest. They protect "Boy with Apple," investigate the murder and search for the lost will amendment—and in doing so, the two forge an unbreakable trust and friendship.

"The Grand Budapest Hotel" is the best film I've seen so far in 2014. Barring some cinematic meltdown, we should see this film getting the nod during awards season. My advice is to avoid the film-snob academic analysis and just see this film with an open mind and on your own accord.

Enjoy as the themes of love and loyalty sprout wings and carry you on the wildly funny ride.