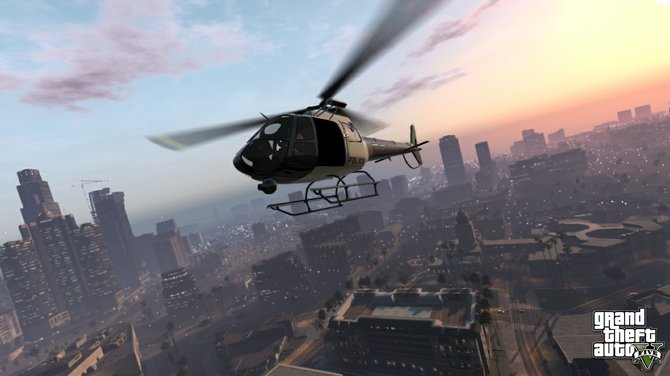 “Grand Theft Auto V” is a triumphant return after a few missteps in the series’ fourth installment. Photo by Courtesy Rockstar Games

I remember my first experience with "Grand Theft Auto." I couldn't have been more than 11, dragged along to some dinner party with the promise that someone my age would be around to play with. Not the case. Instead, there was an empty bedroom with a PS2 and a copy of "Grand Theft Auto."

I distinctly remember not having a clue what to do with the game when I picked it up. Not wanting to affect the unknown gameowner's progress, I had to content myself with aimless wandering. I ran over pedestrians. I fled from cops. Reader, I made it with a digital hooker. And that was all it took. I was engrossed by the firm reality of Liberty City, the city that sprawled and breathed, and invited you to break both its laws and the bones of its inhabitants.

Years passed, and this liberating sandbox mentality grew into something that was almost expected of most games, finding its way into so many otherwise sufficient titles that it actually began to exhaust the industry. Chasing the high of that first expedition into the grim parody of America that Rockstar provided was, in many ways, the central current of gaming in the last decade—but never was it more fully realized than in the work of the masters themselves.

"Vice City" brought nuance and characterization to what had previously been a thin narrative. "San Andreas" blew the whole thing wide open, freeing the player to explore a world of liberty, not just a single city. And "Grand Theft Auto IV," arguably the only misstep, brought the series into stunning, next-generation reality at the cost of much of its freedom and charm. It's fitting that a return to San Andreas would herald the return the undisputed title to the "Grand Theft Auto" series, marrying the vast technical strides of the fourth installment with the classic formula that electrified gamers everywhere to begin with.

The world of "Grand Theft Auto" has never been larger. Focusing the action singularly on the city of Los Santos and the surrounding Blaine County, GTAV accomplishes a sense of height and scale that really sets it apart from its predecessors and competitors. More polished are the vehicle physics, which through years of tweaking have finally found a sweet spot of semi-realistic weight and drag that retains enough of an arcade-like feel to make car chases exciting and believable.

One of the finest new features to grace the series is the character-switching system. Rather than settle for a single criminal sociopath, GTAV offers you three: the exasperated, unretired bank robber Michael De Santa, his bitter would-be protege Franklin Clinton and the insane, gas-huffing CEO/meth kingpin Trevor Phillips. GTAV's central characters are eminently likable even in the depths of their complete disregard for human decency (and in Trevor's case, pants), and the seamless switching allows them time to move around the map organically, meaning you're constantly jumping into what feels like a real day in the life of a criminal.

Gameplay-wise, this makes bank heists and shoot-outs three times as intense, and plays perfectly into the smash-cut editing of the crime films GTA has always taken its thematic cues from.

If there's a but to be found in this entire review, it would have to relate to the game's absence of interesting female characters. Much ink has already been spilled over the subject, so I'll be clear. I have zero interest in "Grand Theft Auto"—or really, any other game—bending over backward to present some hackneyed "strong female character." The complaint I have in playing this game is not that I disapprove of the women presented any more than I disapprove of the amoral, murdering men. It's that the women are fundamentally uninteresting. They're facile, and aside from Michael's domestic woes, they're entirely disposable. "Grand Theft Auto III" and "San Andreas," at least, had the outrageous, psychopathic Catalina—a perfectly valid addition to the cast. The absence of any compelling female presence is probably the weakest point of the title.

And it's possibly the only weak point at all. At its core, GTAV is the game we've all been waiting for. It is complex, exciting, endlessly replayable and worth your money.