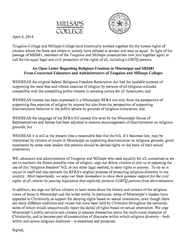 JACKSON — The Rev. Loye B. Ashton, a religious-studies professor at Tougaloo College, sent a joint letter against SB 2681 this morning from Millsaps and Tougaloo colleges. Following is his email explaining and then text of the letter.

This poorly conceived law has since been amended from its original form to address criticism that it was too much a return to the Jim Crow days of legal discrimination based on race and ethnicity, but now including women, the LGBTQ community, people of other faiths as well as persons of color. However, the amendments are largely cosmetic and the ACLU has spoken out loudly against this legislation. Nevertheless, it passed with its defenders claiming that those who oppose it are “from out of Mississippi or anti-religious.” Nothing could be farther from the truth. To that end, Tougaloo College and Millsaps College, sisters institutions of higher education in the state of Mississippi who have stood together against unjust laws in support of civil rights for more fair and democratic society since 1933, have drafted the attached letter. This letter was initiated by the religious studies faculty at Millsaps and endorsed by the religious studies faculty at Tougaloo. It has also received the support of the administration of both Colleges.*

We thank-you for your reception of this letter and appreciate you using it to inform the citizens of Mississippi and this great nation that religious diversity does not need to discriminate and that true religious freedom does not compromise the rights of others.

Tougaloo College and Millsaps College have historically worked together for the human rights of citizens whom the State and others in society have refused to protect and treat as equal. In light of the passage of SB2681, members of the Tougaloo and Millsaps communities now join together again to call for the equal legal and civil protection of the rights of all, including LGBTQ persons.

WHEREAS the original federal Religious Freedom Restoration Act had the laudable purpose of supporting the most free and vibrant exercise of religion by persons of all religious outlooks compatible with the compelling public interest in assuring justice for all Americans; and

WHEREAS the language of the RFRA bill passed this term by the Mississippi House of Representatives and Senate has been adjusted to remove encouragement of discrimination on religious grounds; but

WHEREAS it is still at the present time a reasonable fear that the bill, if it becomes law, may be interpreted by citizens or courts in Mississippi as supporting discrimination on religious grounds, given statements by some state leaders that persons should be denied rights on the basis of their sexual orientation;

WE, educators and administrators of Tougaloo and Millsaps who seek equality for all, concerned as we are to maintain the fairest possible view of religion, urge our fellow citizens to join us in opposing the use of this "religious freedom" bill, or any other legal method, to deny rights to anyone. To do so is unjust in itself and also perverts the RFRA's original purpose of protecting religious diversity in our country. Most importantly, we urge our State lawmakers to show their genuine support for the civil rights of all citizens by passing legislation that explicitly protects LGBTQ persons from discrimination.

In addition, we urge our fellow citizens to learn more about the history and content of the religious views of those in Mississippi and the wider world. In particular, some of Mississippi’s leaders have appealed to Christianity as support for denying rights based on sexual orientation, even though there are many different traditions and values that have been held by Christians throughout the centuries, some of which would unequivocally reject the denial of rights based on sexual orientation. We urge Mississippi’s public servants and citizens to educate themselves about the multi-vocal character of Christianity, and to become part of communities of discourse within which religious diversity—both within and across religious traditions—is examined and protected.

Dr. Kimberly Gladden Burke, Dean of the Else School of Management, Millsaps College

*Rev. Ashton wrote after this letter went up to say that he should not have said the Millsaps administration had signed on, because only the Else Business School signed on and not the Millsaps president.

CORRECTION: The above piece originally listed Rev. Ashton as a professor at Millsaps; he is at Tougaloo. We apologize.

In looking at this bill, I am reminded of my friend Trent Lott's book title. This is indeed like taking a box of cats, upending it in your living room, and then "herding cats" back into a coherent group. He was remarking about Senators and his time as Senate Majority Leader, but I think it would equally apply to getting society back in order after this law has run its course and done its mischief. And I think it will cost the State and the taxpayers greatly to defend it and to reassure businesses planning on relocating here to Mississippi.