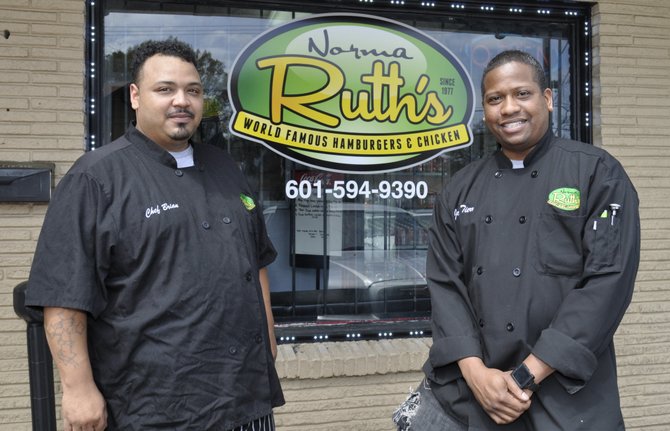 John "Stax" Tierre moved to Jackson from Houston, Texas, in 1996 to attend Jackson State University on a tennis scholarship. The three-time SWAC champion majored in business administration during his time at JSU and, upon graduating, decided to headquarter his planned business venture in Jackson.

Norma Ruth's is a takeout-only restaurant inspired by and named for Tierre's grandmother, who was born in Omaha, Neb., in 1891.

"My grandmother was passionate about cooking," Tierre said. "She would do it for her church, for family members and for the community. She became popular for her baking and soul food dishes. People came from all over to sample her food, including celebrities and athletes."

Norma Ruth's chef Brian Myrick, who has also worked for Jackson's Char and Anjou restaurants, offers up rib-eye steaks, wings, burgers, seafood such as shrimp and crab claws, and more. Tierre is especially proud of the restaurant's tilapia, and shrimp and salmon balls.

"We're bringing a type of food to this side of town that wasn't here before," Tierre said. "We're working with 450 square feet, and we've taken it and made it efficient, like what you have to do in New York City. I consider this to be my own Jackson growth project. I've watched the local restaurateurs like Jeff Good and tried to model myself after them, and I've been providing jobs for all ethnic groups in Jackson here and at my other shops. The community response we're getting has been amazing."

Norma Ruth's is open Monday through Saturday from 11 a.m. to 10 p.m. For information call 601-594-9390 or communicate through Instagram @normaruths.

On Thursday, March 27, Gov. Phil Bryant and officials from the Mississippi Development Authority cut the ribbon on MDA's new Entrepreneur Center, located on the first floor of the Woolfolk State Office Building in Jackson. The Entrepreneur Center provides services free-of-charge to individuals interested in starting a new business or expanding existing operations.

"The new Entrepreneur Center at the Mississippi Development Authority is designed to provide better access to the information and resources we offer that will help new potential entrepreneurs and existing small business owners pursue and maintain successful operations in our state," MDA Entrepreneur Center Manager John Brandon said in a release.

The center includes a resource library and workstations so clients can work on business plans with easy access to the resource team. The Entrepreneur Center also unveiled a new website with information to assist Mississippi's small business owners.

The Entrepreneur Center offers other services that include providing entrepreneurs with general business assistance—such as developing a business plan—as well as information regarding finance and accounting, marketing, and retail assistance. The center also hosts seminars on topics such as "How to Start Your Own Business" and "Servicing Your Customers."

WILL DEFINITELY CHECK IT OUT.