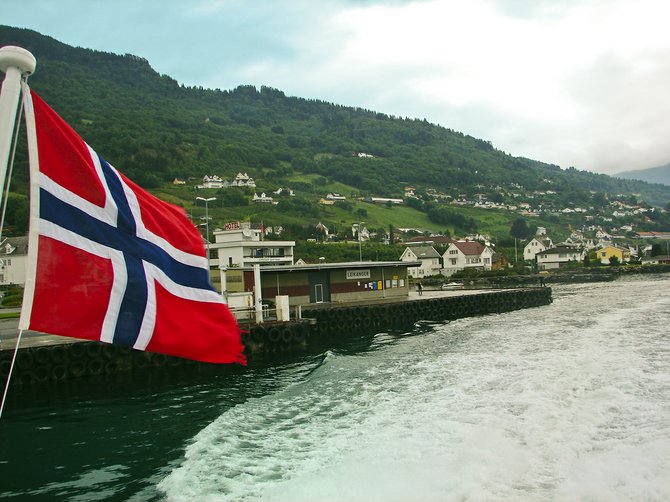 A trip to Norway was an eye-opener for the author, who knew little about the country. Photo by Richard Coupe

Swallowing hard, I handed the gaily colored bills, which reminded me of Monopoly money, to the cashier. After parting with the 1,022 kroners, I did a quick calculation in my head and realized that I had just spent almost $200 on lunch for five in a glorified cafeteria. "Welcome to Norway," I thought, "the country with the highest standard of living in the world."

When I first considered going to Norway, it was really hard to think of anything that I knew about the country, other than it has some weird-looking extra letters in its alphabet. Truth be told, I really couldn't even have picked it out accurately on a map. All those Scandinavian countries sort of run together—actually, it was fascinating to realize that Norway, Sweden, Finland and Russia all come together near the Arctic.

Ashamedly, the only thing I could recall about Norway was the movie "Trollhunter" that came out a few years back. What a great movie that was: Shot in the new reality-TV style, it follows three journalism students conducting investigative work on a mysterious man who turns out to belong to a secret government agency responsible for the country's trolls. But I couldn't think of any artists or authors or musicians that originated from Norway.

Thinking harder, I thought, wasn't there a Thor Heyerdahl of Kon-Tiki fame? And Amundsen, the man who beat Scott to the South Pole was Norwegian. Of course, we have the Vikings to consider, too.

So through this curiosity, I was hooked. My daughter's best friend, Marianne, a Norwegian she had met while they both were exchange students in Ecuador, said she would take a week off and show us around—a deal I couldn't pass up.

Oslo is a surprisingly compact city with good public transportation and about 1.5 million residents in the greater metropolitan area. As in many places that have a severe climate, the buildings all have a very functional look without a lot of ornamental architecture. The city of Oslo arcs around the northern end of Oslofjord and is surrounded by hills and mountains with spectacular views of Oslofjord. Hundreds of islands and lakes lie within the municipality.

One of the first things we noticed after arriving in July was that, as in many places where it is cold much of the time, whenever the weather turns warm (they call 70 degrees warm, ha!), Norwegians can be found sprawled out everywhere, sunbathing in any green space or nearby park bench wearing as little clothing as possible.

We stayed at Marianne's sister's apartment a little north of downtown, but conveniently located near the Metro stop in one direction and a tram station in the other. The apartment takes up the top two floors of a building built in the 1920s and stretches around the entire block with an open square in the middle. The square contained clotheslines, hordes of bicycles, a small playground, a sandy spot for 20 or 30 small barbecues and some picnic tables. A very dangerous-looking and fragile-feeling spiral staircase connected the two floors of the apartment, which were sparsely decorated, with very white walls and ceiling.

The furniture was Birch wood-blond and looked like it all came from IKEA—very Scandinavian. The upstairs, which mostly consisted of a living area and a bedroom, had a low ceiling, and much of the space was height challenged due to the slope of the roof. The best feature of the apartment was a cozy—maybe 10-foot by 10-foot—porch, cut out of the roof, that gave a beautiful view yet retained all the elements of privacy. We ate all our meals there.

It turns out I am familiar with Norwegian painters; I just didn't know it. The most famous and visible right now, because of the 150th anniversary of his birth, is Edvard Munch. He was an expressionist painter—a contemporary of Gauguin and van Gogh and, like them, had a somewhat tortured life. He is most famous for his painting "The Scream," an abstract painting of a figure with his hands to his head and an agonizing expression on his face, in front of a swirling orange sky. Munch actually painted four versions of the painting. It is a very powerful piece, evoking a primal response from the viewer. We've all been there.

Oslo has three museums on the Bygdoy peninsula worth seeing, all within walking distance of each other: The Viking Ship, the Kon-Tiki and the Fram Museum. These museums celebrate that explorer spirit that we associate with the Norwegians.

The impressive Viking Ships on display were recovered from burial mounds. I don't know much about the Vikings and sort of held that popular impression (think Capital One commercials) that they were a bunch of brigands wearing horned helmets, raping, burning and pillaging the world. That still may be true, but they sure could build boats. The workmanship and intricate detail is astounding. In order to fund craftsman to be able to do that level of work, the Vikings must have had an advanced society of some type.

The Kon-Tiki Museum makes you realize what courage (or maybe it was stupidity) these guys had in challenging the Pacific Ocean on a balsa wood raft with little sailing experience, all to prove a point.

Fram means "forward" in Norwegian and is the name of a specially built boat used for arctic exploration around the turn of the 20th century. The entire vessel is in an A-frame type building with displays lining the walls at different levels outlining various arctic explorations. The ship itself is open for viewing.

Besides these three Viking-based museums, though, the attraction that meant the most to me was the Nobel Peace Center near the main harbor. It wasn't an especially great museum, really, when considering the hefty admission price and my high expectations going into a Nobel Peace  Prize Museum.

But just reading the list of Nobel Prize laureates and why they received the prize was bone-chillingly emotional. It gave me hope to learn about people throughout the world in all walks of life who stood up for what was right and found a way forward without advocating violence.

Oslo has a surprisingly large immigrant population and, as the sun barely sets that far north, in the summer the cafes and bars don't ever seem to close. Norwegians are very friendly, and (good for Americans) they all speak English. Although Norway is expensive, it was well worth the visit for me.