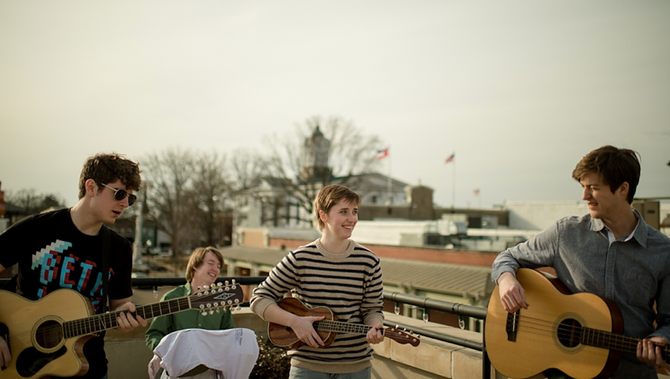 What makes The Red Thangs so successful is what each member brings to the band. Blair Bingham (keys, percussion, bass, vocals) is excellent at harmonies. Adam Ray (guitar, trumpet, bass, vocals) has the most training in music theory, lending a more classic standpoint to the band. Drew Shetley (drums) is the only member of the group who can play drums, and Charles Adcock (bass, guitar, vocals) is the most versed in songwriting. With these skills combined, The Red Thangs creates a sound that, when broken down, still sounds well-assembled.

"It really comes down to (that) we're trying to make a unified sound and create complete music. It's not fragmented by what each member of the band likes," Ray says.

Residing in one of Mississippi's music epicenters doesn't hurt. In the last few years, Oxford's music scene has boomed, thanks to labels such as Fat Possum and bands such as Colour Revolt. It's safe to say that the town is a definite promoter of  local bands.

"Being from Mississippi, you have this vibrant music scene that you can be a part of but, at the same time, it's not overcrowded," Ray says. "There's a lot of good music, but it's not being made by a lot of people. Certain elements of style come just because it's from Mississippi—it's really just kind of the surroundings—it's definitely there."

With an eclectic sound that sometimes features ukuleles and trumpets, The Red Thangs promise an indie-pop twang that resembles the sound of a more southern Animal Collective but with deeper vocals. The band's Mississippi roots shine through with Adcock's vocals, and the finesse of the band's instrumentation lends a hand to the polished feel of much of the band's material.

One of the biggest challenges for the band is the pace at which it's moving.

"Providing enough material to really match what we're capable of (is tough)," Ray says. "We've got what we think are excellent songs, but we've had trouble getting them laid down so everyone can hear them."

Since the band's inception in December 2012, the songwriting (primarily Adcock's doing) has definitely evolved.

"It's gotten better. Initially, when I started writing songs, (anything) went. Now that I've learned what (the band) likes, we've started to form a sound," Adcock says.

In its song names, the band makes sure that each title is both symbolic and interesting. "Zombie Pocahontas," one of the band's crowd favorites, is about Adcock's Native American girlfriend.

"For Halloween she had been dressing up for a zombie," he says. "At the end of the song, I say, 'Maybe next Halloween you and I could both trick-or-treat, I could be a zombie John Smith, and you could be zombie Pocahontas.'"

In addition to their original material, The Red Thangs throw a handful of pop cover songs in each set, including Britney Spears' "Toxic." This started out as a joke for every member of the band—except for Adcock. Once, during a practice session, a member suggested that the band include a Britney Spears song in the set, and Adcock swiftly picked up his guitar and launched into a carefully constructed version of the song. It was something he'd been working on already, and the band loved it so much that they kept it.