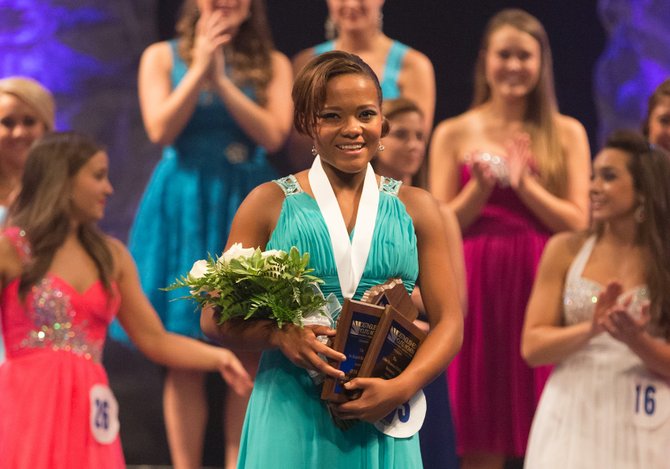 Peryn Reeves-Darby, 17, won the title of Mississippi’s Distinguished Young Woman July 18. She was one of 33 Mississippi high school seniors competing. Darby received the title along with the Overall Scholastic Award and the Overall Self-Expression Award. She received $17,000 in cash scholarships and other scholarships to universities around the country, and the right to compete in the program's national competition next summer.

Darby, a student at St. Andrew's Episcopal High School, is a member of the Teen Trendsetters Tutoring Program, as well as Jack and Jill of America, and spends time serving young people in the Jackson metro area. Portico Magazine named her one of the 25 Students to Change the World last year. Darby has taken part in the Global Studies Program and traveled to Scotland and Rwanda, and she received a Guillot Travel Grant to Rwanda. Yesterday, July 25, Darby left on a trip to Thailand, where she will help build homes as part of the Global Habitat for Humanity Program.

"Experiences like my trip to Rwanda last summer changed my life," Darby said. "I got to help a young boy there and communicate with him in his native language. I've also been so blessed to be part of the (Distinguished Young Women) program, and I encourage all girls to participate and do their best."

Darby is considering attending the University of Chicago or Dartmouth College with the scholarship funds she won. She intends to major in chemistry to pursue a career in chemical engineering.

Darby lives in Jackson with her parents, Vonda Reeves-Darby and Alvin Darby, and her three brothers, Royce, Jaren and Galen.

The Distinguished Young Women Program, founded as America's Junior Miss in 1957, evaluates contestants on scholastic achievement, self-expression, talent, fitness and interviews. The DYWP is the oldest and largest scholarship program for young women, featuring more than 6,500 participants per year. The program has awarded more than $93 million in scholarships since its founding. Learn more about the DYWP at the program's website.

Congratulations Peryn!!! I know that Vonda and Alvin are so proud!!! I've known your parents since back in our days at Millsaps College. They have produced a beautiful, articulate, and very talented young lady!!!