A 'Sit Down and Shut Up' Kind of Beer | Jackson Free Press | Jackson, MS

A 'Sit Down and Shut Up' Kind of Beer 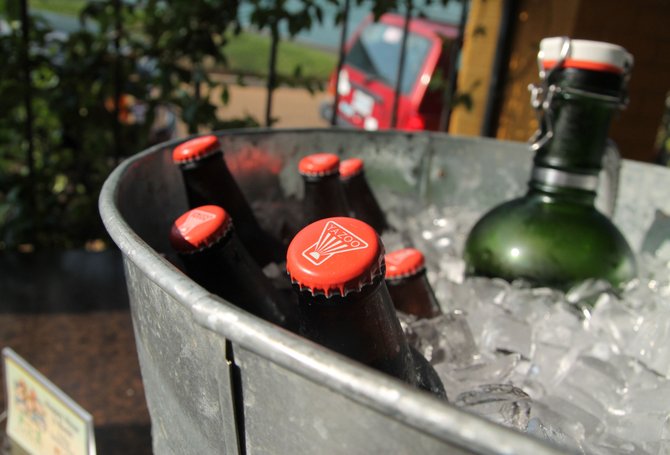 Bottle shares and beer tastings among friends are great ways to explore beers you might not discover on your own. Photo by Melanie Boyd.

I remember my father giving me sips of beer when I was a child as most men probably do. I hated it. I didn't drink in high school, and it wasn't until my mid-20s that I started drinking beer on my own, and usually only in social settings. When I lived in Austin, Texas, and was working an internship at a local Italian trattoria, the cooks and I would go to a bar down the street and order up a pitcher of Lone Star. It wasn't particularly good, but it was cold and cheap and led to good conversation while talking shop about the night's service. On good nights, and when we wanted to splurge a little, someone would pony up for a pitcher of Fireman's #4. Austin had several local breweries, and I enjoyed trying their offerings but still wasn't much of a beer drinker.

When I moved back to Dallas, I landed a job as the opening sous chef for a fun gastro pub where we had 40 beers on tap and countless more by the bottle. The policy for the restaurant was that everyone was entitled to a free "shift beer" and could purchase anything else at 50 percent off, so let's just say I made my way through the extensive list fairly quickly. The beer that was my "gateway" beer, the one that hit my lips and made me say, "Wow! Beer can be like this?" was Delirium Nocturnum from Belgium. Not available in Jackson (hopefully soon!), this beer has flavors of fruit and caramely malts with a brilliant carbonation and mouthfeel.

From that point forward, I tried as many different varieties as I could. Being a chef, my favorite beers were those brewed with interesting culinary ingredients—fruits, herbs, spices, coffee, chocolate—as long as I could taste them. If a beer said it was brewed with pecans, and I didn't taste them, I didn't care for it. But at this point, I still didn't fully understand what to look for in a beer or how to properly enjoy it.

When I moved to Jackson in 2010, before our beer laws changed, I really enjoyed Lazy Magnolia's offerings, and my beer of choice was Indian Summer. But before long, I had exhausted the variety of beers available in our area and, due to our strict limitations, found myself focusing more on classic cocktails than beer. Fortunately, local laws concerning beer are changing. Each month brings a new brewery to Mississippi, higher-gravity beers, new flavors and experiences. We even have incredible new Mississippi breweries (go out and support them!). Once again I was able to get excited about beer in a whole new way.

Through the new craft-beer movement, I was able to make some great friends and organize beer tastings and bottle shares. This is a great way to try a bunch of different beers in small quantities without spending tons of money (or getting too drunk). As a result of these bottle shares, I have now tried beers from all over the world, new styles and flavors and aromas. I've found a new favorite beer at one of these tastings. A beer that made me sit down. And shut up.

A friend brought a bottle of 2009 Papier from The Bruery located in California. This beer is brewed in the old ale style, and then aged in barrels. When The Bruery released this beer, someone purchased it and cellared it for another four years before it made its way to our beer tasting. Everyone eyeballed the beautiful label of the beer with anticipation. Not all beers age well, but this one was around 15 percent alcohol—typically, higher-alcohol beers will stand the test of time when cellared around 55 degrees and out of the light.

We opened the bottle and poured the dark liquid into snifter glasses. We stood around the kitchen counter and swirled the beer in our glasses before taking in the aroma. Figs, plums, cocoa and brandy wafted up into my nostrils. The beer had a smooth and chewy texture, and flavors of toffee and caramel with bourbon notes mixed in with the dark fruits. I said, "Guys, we need to sit down to enjoy this beer." And sit down we did. The only thing to come out of my mouth for the next several minutes was "wow" and "incredible" and "unbelievable."

Thus began my obsession with finding more of these beers. I am now cellaring two versions, one from 2011 and one from 2013, which received additional aging in bourbon barrels.

You can discover incredible, world-class beers if you just look. When you travel, drink as many of the local brews as possible. Visit a beer store and pick up something you've never tried. Ask the sales person for suggestions. Organize beer tastings and bottle shares. Keep tasting notes to remember the beers you've tried (several great mobile apps are out there to help you do this). Over time, your palate will expand and become more developed and experienced. Above all else, trust your palate—it's always a good beer as long as you enjoy it!

When tasting with friends, it's a good idea to take notes on what appeals to you (or doesn't). Most folks use five categories when evaluating a beer:

Appearance - Note the beer's color, carbonation, head and its retention. Is it clear or cloudy? Does it look lackluster and dull or alive and inviting?

Taste - Take a deep sip of the beer. Note any flavors, or interpretations of flavors, that you might discover. The descriptions will be similar to what you smell. Is the beer built-well? Is there a balance between the ingredients? Was the beer brewed with a specific dominance of character in mind? How does it fit the style?

Mouthfeel - Take another sip and let it wander. Note how the beer feels on the palate and its body. Light, heavy, chewy, thin or watery, smooth or coarse? Was the beer flat, over-carbonated?

Overall - Your overall impression of the beer. Some people also judge the finish of the beer.