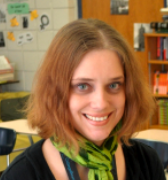 "I have the best job there is," says Tarasa Brierly-Harp, chairwoman of the English department and teacher at Murrah High School. The former Floridian attended the Mississippi University for Women and has been teaching at Murrah for more than a decade.

Brierly-Harp, 35, has received numerous awards and recognition for her teaching: In 2005 she was metro Jackson teacher of the year as well as the Murrah teacher of the year, in 2006 Parents for Public Schools named her an outstanding educator, and Brierly-Harp earned the title of STAR Teacher in 2011.

The petite (maybe 5'3") mother and teacher met her husband, Wes, in 10th grade in Florida, and one followed the other to Mississippi (he to the architecture school at Mississippi State).

"That is how I got here," she says, and then adds, "but what everyone always asks me is why I am still here." She gets annoyed at the question, and points out the hidden implication that there is something wrong with Jackson.

"Jackson really is home," she says. "I don't have family ties here, but we have collected a lot of surrogate family here over the years. And contrary to what most might expect, my kids are getting an amazing public education here--one we probably couldn't afford if we left."

The Harp family lives in Fondren and enjoys being within in a mile or so of Tarasa's and Wes' workplaces, as well as their children's schools (Bailey APAC and McWille Montessori) and daycare. "I love being able to walk the kids to the park, to get groceries, to eat great food, or just to hang out," Brierly-Harp says. "As a busy working mother of four, I don't always have a chance to take advantage of the incredibly cool place I live, but it means a lot to me to live in a fairly vibrant, culturally diverse area."

Brierly-Harp's students are another big reason to stay in Jackson. "They think I'm mean," she says. "But over half of them pass the qualifying exam for AP English each year, and this gives them a great sense of accomplishment."

Although Brierly-Harp mainly teaches English, she also touches on many other topics such as history, writing, debate, literature and journalism. She takes her students to Eudora Welty's house and to Medgar Evers' house as part of a civil rights unit. "I like to think that since language skills are so incredibly important in so many aspects of life, I can have some lasting impact on most of the kids I teach," she says.

"Hopefully, they learn more from me than when to use a comma, but hey, I'll take what I can get. My kids," she adds, referring to Murrah students, "anchor me pretty solidly in Jackson. In many ways, they are Jackson, and that means this is where I belong--at least for a pretty long while. Murrah--the only place to be."