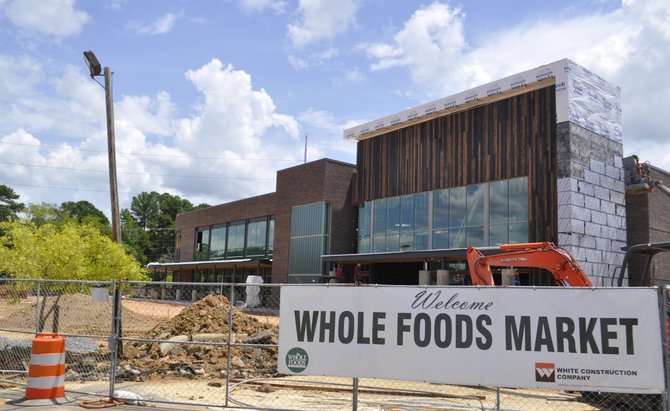 Whole Foods Market, an Austin, Texas-based grocery chain that features natural and organic foods, recently put out a call for applicants for the company's upcoming Jackson location, currently still under construction. Though no specific opening date has been decided upon, company officials hope to have the new store open before March 2014.

Whole Foods spokeswoman Darrah Horgan told the JFP in October 2013 that the company has built its string of approximately 350 stores in the United States on offering a healthy alternative to the average grocery store.

"We carry mainly minimally processed food products," Horgan said. "The biggest differentiating factor is our quality standards. You're not going to find anything on our shelves that has artificial colors, flavors, sweeteners, no hydrogenated fats. We source a lot of local products as well."

Recently, Whole Foods sent out a release announcing that the company has applied for a package retailer permit to sell liquor in the Jackson store.

This year, local advertising agency GodwinGroup made it onto leading ad industry trade magazine AdWeek's list of top firms in the 50 states. Adweek selected only one agency in each state, citing that it chose "[t]he one that, more often than not, just gets it right."

"It's certainly an honor just to be named on a list with names like Fallon, The Martin Agency, Crispin Porter + Bogusky, BBDO and Wieden + Kennedy," Philip Shirley, chairman and CEO of GodwinGroup, said in a release. "Those firms set the bar high for our industry, and it's gratifying to work with prestigious clients who partner with us to produce work that gets this kind of recognition."

Adweek's criteria for top firms include head count, notable clients, legacy and reputation. The agencies also must be founded in the state they are located in. GodwinGroup, founded in 1937 and headquartered in Jackson, has had offices on the Mississippi Gulf Coast since 1992.

Earlier this year, the Mississippi Business Journal named GodwinGroup as one of its "Best Places to Work in Mississippi."

"Mississippi Development Authority and Gov. Bryant are achieving success in attracting business and industry to our state with announced jobs triple that of last year," GodwinGroup President Jeff Russell said in a release. "GodwinGroup is delighted to once again partner with MDA to market Mississippi to national and international audiences using the latest digital marketing strategies."

Mississippi to Texas Railway Under Consideration

Officials with the Louisiana Department of Transportation and Development are hoping to soon begin a study on the possibility of establishing an Amtrak passenger rail line connecting Texas and Mississippi through northern Louisiana.

Kent Rogers, executive director of the Northwest Louisiana Council of Governments, is overseeing the planned study.

"We're networking with the Texas and Mississippi Departments of Transportation on trying to develop a line from Dallas Fort Worth to Shreveport and from Shreveport to Vicksburg," Rogers said. "Since Vicksburg is just over the state line, it's an obvious place for the line to terminate. We've put in a request for qualifications from engineering firms to develop a study to see if this project would be feasible. There are a number of issues to consider, such as necessary partnerships between rail companies, the best locations for stops and the need for state subsidies."

Another issue with the planned rail project is that Amtrak does not own any of its own rail lines in the area. Amtrak would need to run its trains on lines owned by Kansas City Southern Railway, which are currently used for freight and not passenger transport. This would bring up the issue of some of the lines possibly requiring upgrades to accommodate the different needs of passenger transport.

Rogers hopes the study can get underway by January. Louisiana Department of Transportation and Development Secretary Sherri LeBas secured a $250,000 grant from state Rep. Roy Burrell, D-Shreveport, to start the study.

I actually haven't been in a Whole Foods store before but I am looking forward to it.

It's an experience, but if you're not careful, you could leave out spending more than you planned. I'm a fan of their fresh seafood, produce and in-house pizzas.

I'm all for expanding Amtrak, though Vicksburg seems like an unlikely place to terminate a train. There is already Amtrak service from Marshall TX (40 miles west of Shreveport) to Dallas and points southwest and Amtrak service from Meridian, MS to Atlanta and points northeast. So, basically the only missing link from creating 3400 miles of direct service from New York to Los Angeles via Atlanta and Dallas, is the short 345 mile stretch from Meridian to Marshall. It would make far more sense to break off a section of the Southern Crescent at Meridian to connect with the Texas Eagle in Marshall or Longview than to terminate a northern Louisiana train at Vicksburg. And of course I'm sure Amtrak would be delighted to initiate the service if Mississippi would join Louisiana in putting up some funding. Unfortunately, I suspect the current crop of Mississippi politicians would far rather just spend all the state's transportation money on highways.

Would be interested in shopping in the new Whole Foods Store. I am not sure what liquor has to do with "natural food" though.

As long as Amtrak is running on other track that they don't own, they will always have problems. This country needs a program of building a system of passenger bullet train lines and track. Get on in Jackson, be in Dallas in a few hours.