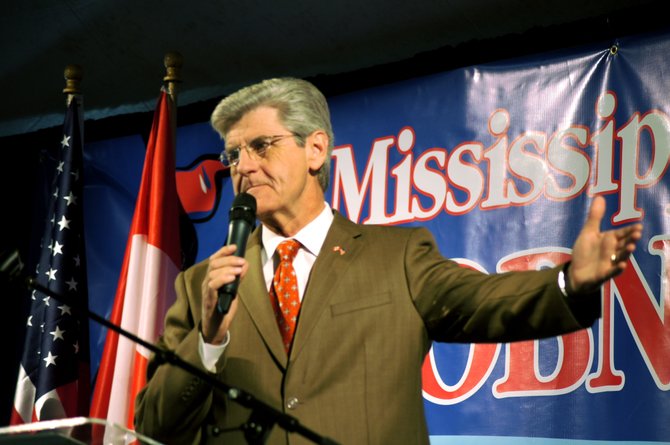 Late Monday, Gov. Phil Bryant issued an executive order "affirming Mississippi's right and responsibility to define and implement its own public-school standards and curricula and making it clear that "under state law, this core function of state government cannot be ceded to the federal government." Photo by R.L. Nave.

Gov. Phil Bryant wants to ensure that the State of Mississippi is the only entity educating Mississippi kids.

Late Monday, Bryant issued an executive order "affirming Mississippi's right and responsibility to define and implement its own public-school standards and curricula and making it clear that "under state law, this core function of state government cannot be ceded to the federal government."

"We have made tremendous progress in enacting improvements in our public education system, and we will continue pursuing what works for Mississippi children," Bryant said in his order.

Bryant's order comes on the heels of the state's implementation of Common Core State Standards, which 45 states have already put in place to standardize English and math education. Common core has drawn criticism from both liberals and conservatives, who are fearful of the federal government playing too large a part in public education.

"Over the past three years, the Mississippi Department of Education has been providing professional development to educators across the state in preparation for higher standards. ... School districts have developed the curriculum around Common Core State Standards and have implemented these more rigorous learning goals in classrooms. The federal government hasn't done any of that. Our teachers and school leaders across the state have done the hard work to make this happen," Wright said in a statement.

Mississippi, 44 other states and the District of Columbia have adopted Common Core standards, which supporters say are designed to better prepare American students for college and careers. Common Core proponents also say it establishes uniform benchmarks that can put America on a level educational playing field with other countries.

Though Mississippi's initial adoption of Common Core earlier this year caused little controversy, a group of Republican state senators have increased attacks on the standards. Those senators have held meetings across the state to rally opposition and have led supporters to local school board meetings to pressure those boards.

Debate over the issue is expected when the Legislature convenes Jan. 7 in Jackson.

"Mississippi families need to know that their children's education is not going to be turned over to an outside authority, and I thank Gov. Bryant for this order," Moore said.

Senate Education Chairman Gray Tollison, R-Oxford, said: "We have seen tremendous momentum for improvement, and this order clarifies that Mississippians have the right to continue creating education solutions that are best for this state."