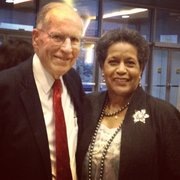 Few eyes were dry when Myrlie Evers-Williams, the widow of Jackson civil-rights hero Medgar Evers, stood in front of 600 people in downtown Jackson Thursday night and declared her love for Mississippi and for her first husband, gunned down nearly 50 years ago.

"Medgar was a key person in my life; one man who turned my life around, as a 17, 18 year old," the regal activist, 79, told the diverse crowd at Mississippi Center for Justice's annual Champions of Justice Dinner, where she was honored alongside former Gov. William Winter. "He said to me, 'We do have a future (in Mississippi). Before Byron de la Beckwith shot him in cold blood at his home in Jackson, Medger told his wife: "Don't drop to the level to those who hate; lift yourself up; be creative, be strong and move forward."

Still, Myrlie Evers said, after her husband's murder, she has alternated between the need for revenge and choosing the higher ground--"having a split personality that said go get them (while) another said there are ways to get them. Either through violence or ways of doing good."

The Vicksburg native--who took her children to California after their father's death--said that continuing to love Mississippi has been challenging at times. "Sometimes I had strong and very unhealthy feelings for the state of my birth. But I remembered what Medgar said many times over and I quote him, "I love Mississippi; it is the home of my birth. I love Mississippi, and one day not only will it be a better place in which to live, but it will be the best place in America to live."

She added: "We are still waiting to see that happen, but I can tell you that Mississippi has come such a long way today, and we have so much to be proud of."

Evers-Williams warned that poverty--a main focus of the Mississippi Center for Justice--does not only strike people of color. "Poverty does not discriminate ... it touches every one of us." She said our responsibility is to "see that we work in the most creative ways possible to bring solutions to the ills of this world."

The Alcorn State graduate, who recently returned there to teach at the behest of President Christopher Brown, said we all need to take the teachings of our history "and turn them into positives." She added: "This organization is doing this; other organizations are doing the same, and Mississippi is moving forward. Are we there, yet? No. We still have much to do."

Evers-Williams challenged the audience to have the "vigor, vim and vitality" to "get out there and work in our neighborhoods and particularly work with young people, to help them understand the past and how it relates to today."

"Encourage them not necessarily to be beaten, have dogs bite us, to be washed away by hoses, to kneel in prayer and be criticized for that. That was a time then; this is today. We must ask ourselves, in keeping up with the times; what do we do? ... Let us embrace the thought that we must do something," she challenged.

'Prisoners of That System'

When it was former Gov. William Williams' turn, he spent much of his time praising Evers-Williams--"my hero," he called her, adding that she is "one of the most courageous and most remarkable women I've ever known."

Winter, 89, recalled hosting a reception at the governor's mansion just before his "lease ran out," and telling her: "All the white folks in Mississippi owed you and Medgar Evers as much as black folks. He freed us; we were all prisoners of that system. Because of you, we were able to shake off the bonds that help us. You belong to Mississippi, but you are a national and world treasure."

In a spirited talk one would expect from a man 40 years younger, Winter echoed her sentiment that the state has come a long way: "I'm pinching myself at seeing things I never dreamed I'd see ... but we still have a long way to go to achieve the kind of society that we ought to have and we must have. As long as there are so many people with minds still closed or indifferent to continuing disparities that exist in our state and country, we shall not realize and will never realize the fulfillment of our true destiny as people."

Winter also focused on poverty in a state with shockingly high poverty rates. "As long as we have so many of our fellow citizens living below poverty lines ... without jobs, adequate medical care and without good schools ... (we have) little hope that tomorrow will be any better than today. As long as those conditions continue, we obviously have a great deal of work left today. As far as we've come, we still have a mountain to climb," he preached.

The governor who led remarkable education reform in the state said that the founders meant for Americans to help care for one another. "What too many of our fellow citizens do not recognize and perhaps do not understand is that we live in this country under a social contract that was laid out a long time ago by the people who created the united States of America, expressed in the Declaration of Independence and the U.S. Constitution. That we pledge to each other our lives, our fortunes and our sacred honor. We live under that contract, and if we do not observe that contract, we're not going to have the great society we ought to have."

Winter also applauded the work of the Center for Justice and said Mississippians must "... put behind us old system of pitting one against each other."

"We are all in this together; we are all members of one race; we are all members of the human race. So let us not limit what we have the capacity to do," Winter said, adding that it is shameful that the nation that still has the most riches allows so many people to live in squalor without adequate education, health care, housing or food to eat.

"Don't tell me we can't do the right thing by all our citizens," Winter said.

On June 12, 1963, Myrlie Evers and her three children witnessed the assassination of Medgars Evers in the driveway of the family's Jackson home. The couple had been in the forefront of the Civil Rights Movement in the South, opening the first Mississippi NAACP office where they worked for African American voting rights, equal education and justice. He was the organization's field secretary.

If anything, Medgar's murder strengthened Myrlie Evers' resolve to achieve equality for blacks. Central in her struggle was bringing her husband's killer to justice, a fight that took 31 years and three trials. A jury convicted white supremacist Byron De La Beckwith in 1994, and he died in prison in 2001.

Evers, a Vicksburg native, published "For Us, the Living" in 1967. She earned a sociology degree from Pomona College in Claremont, Calif., in 1968. In 1995, Evers became the first woman to chair the NAACP and served for three years.

Earlier this year, Evers-Williams joined the staff at Alcorn State University--where she began her college education--as a distinguished scholar-in-residence, where she lectures in the Department of Social Sciences.

Who is William F. Winter?

Grenada native William F. Winter served as a Democratic governor of Mississippi from 1980 to 1984. There, the World War II and Korean War veteran became an outspoken advocate for quality public education, regardless of class or race.

"I feel highly honored receiving this award, though I have trouble justifying it on what little I've done compared to Miss Myrlie Evers," Winter said in an interview Thursday. "My record will be in marked contrast to hers in regard to furthering justice in our state."

Winter received his law degree from the University of Mississippi in 1949. He held several state offices in Mississippi, including representative and state treasurer. Winter has long worked for racial justice, aiming toward moderation and fair resolutions to racial issues. He served on President Bill Clinton's Advisory Board on Race from 1997 to 1998.

"(Ensuring equal justice for all citizens) takes an understanding by everyone that none of us can be above the law," Winter said. "Justice has to be administered fairly and without distinction to race, class or economic situation. We are all obligated to contribute to that process."

The William Winter Institute for Racial Reconciliation at Ole Miss, where Winter serves as honorary chairman, continues his legacy. In 2008, Winter received a Profile in Courage Award by the John F. Kennedy Presidential Library and Museum. On the organization's website, Winter's Education Reform Act is characterized as "among the most significant pieces of legislation of its kind ever passed."

"The greatest impediment to a good and fair society--a society of equal opportunity--rests on having people be well educated," Winter said. "The biggest fault-line in our society is not so much differences in race as it is with those who do or do not have a good education. (I am working to further education by) joining with other people in this state who are concerned about maintaining adequate public support for education. We are still last in almost every category for funding public education and we have to do better than that."

Read more about the work of the Mississippi Center for Justice: http://www.mscenterforjustice.org/