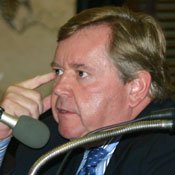 Rep. Bobby Moak, D-Bogue Chitto, said an inventory tax credit, which is uncapped, could cost state taxpayers more than the $30 million per year that Republicans project.

Jackson Mayor Harvey Johnson Jr. Spent Monday, April 30, lobbying lawmakers to pass a bill to let the city to levy a small sales tax increase for infrastructure improvements. At first, the mayor's charm seemed to work on lawmakers. In less than 24 hours, everything had changed. Tuesday morning, the bill died on a procedural move.

Last year, the Legislature agreed to let Jackson collect a 1-cent sales tax for infrastructure and public-safety improvements if 60 percent of voters approved it and if the city set up a commission to oversee how the money was spent. The city objected to the makeup of the proposed commission, and no vote ever took place.

A heated exchange preceded the vote, however, when Rep. Kelvin Buck, D-Holly Springs, pressed House Ways and Means Committee Chairman Jeff Smith, R-Columbus, on changes in the bill. The original legislation only applied to the city of Jackson, but lawmakers amended it to include Pearl, Brandon, Flowood and Holly Springs. Late Sunday, negotiators stripped Holly Springs from the bill.

Buck held Smith's mustache to the fire, demanding to know why lawmakers targeted the 8,000-person town. Smith took the blame: "It was better to have something than let the whole bill die." He said no one had the guts to tell Buck to his face that his hometown would be stripped from the final version of the bill. "You are not being treated fairly," Smith told Buck.

Weekend Warriors
Seersucker-clad legislators were on full display this past weekend as lawmakers completed most of the heavy lifting on a $5.6-billion state budget for the fiscal year starting in July. For the most part, legislators remained cool as they approved funding for state agencies most people have never heard of through more than 100 appropriation bills that comprise the spending plan for the 2013 fiscal year.

Highlights of the Senate's Saturday session included appropriation bills to increase student financial aid by 10 percent over 2012 and to set the Department of Corrections budget at $311.7 million, which is level with the current budget year. Also, Senators voted to create more jobs in the state's Department of Revenue, which would receive a $2.5 million increase to hire more auditors, accountants and customer service-agents to step up tax-collection efforts.

The Mississippi Department of Mental Health will receive $25 million less than in 2012. This includes $20 million for community mental-health facilities transferred to the Medicaid budget. Rep.Herb Frierson, R-Poplarville, said last week that the state wanted to take money from special funds such as mental health and the University of Mississippi Medical Center and put it directly into the Medicaid budget.

Rep. Bobby Moak, D-Bogue Chitto, said the tax could actually cost a lot more because the bill doesn't put a limit on the tax credit. Rep. Cecil Brown, D-Jackson, said the bill lets large retailers like Walmart move inventory to warehouses near their stores to claim a bigger tax credit, and he asked if the Department of Revenue should develop rules to keep companies from doing so. Smith responded that the tax bill did not prevent businesses from being "rascals" and circumventing the law.

Employers' Compensation
Lawmakers came back Monday morning to take up the controversial workers' compensation bill. Supporters said changes were needed to restore parity to a system tipped in workers' favor. The measure makes changes to the state's system of paying people who are injured at work by requiring employees to prove they weren't working drunk or high on drugs.

Rep. Bryant Clark, D-Pickens, said the bill "places burdens on our workers that no other states have." Some changes were to allay concerns of workers' rights advocates. A previous version of the bill removed the longstanding "found dead presumption" in the state's workers' comp law that holds that workers found dead on the job are presumed to have died in the course of doing their jobs.

The final version of the bill restored the found dead presumption and requires claimants to simply submit medical records. The bill required workers to provide proof of a direct causal relationship between their work and injury.

Redistricting Pits Dem vs. Dem
The wait is over, kids. Mississippi House members finally have a new legislative district map to vote on. The map, which adds two districts in rapidly growing DeSoto County, was unveiled at the Capitol last week. Under the plan, several white Democrats could lose their seats either by having to square off with fellow Democrats or by having to compete in mostly GOP districts.

One Jackson Democrat who could be in trouble is Rep. Cecil Brown, whose district was moved into the territory now served by Rep. Bill Denny, R-Jackson. Denny also, coincidentally, was in charge of drawing the up the maps for the House. In addition, Robert Huddleston, D-Sumner, would have to square off against Tommy Taylor, R-Boyle; Kevin Horan, D-Grenada, would face Linda Whittington, D-Schlater; Democrats Bennett Malone of Carthage and Jason White of West would go toe-to-toe as would Blaine Eaton, D-Taylorsville, and Johnny Stringer, D-Montrose.

The plan also increases the number of majority-black districts by one. The Senate released its map Tuesday afternoon as the Jackson Free Press went to print. After the new maps win legislative approval, they could meet challenges in the courts or from the U.S. Department of Justice.

The citizens of the City of Jackson were dealt another disservice by the Mississippi Legislature. At this point, I have no confidence in any of the individuals occupying those seats. That's right, none. It would be great if ALL would resign and allow people to be elected that actually have the interests of the people at the forefront. There is a degree of ineptness that permeates that ENTIRE group. No other City in this state has infrastructure needs that rise to the level of the City of Jackson. But of course since the City of Jackson is majority black, the constant obstruction persists (on both sides). It's naive for one to believe otherwise.