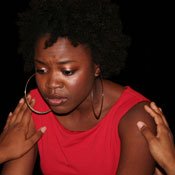 Lashunda Thomas is the Lady in Red in "For Colored Girls," at New Stage May 4, 5 and 6.

Sometimes when people find that the play "For Colored Girls..." is going to be performed in their town, they think of the Tyler Perry adaptation. "I already saw the movie," they think. Perhaps they didn't like it and assume they won't like the choreopoem play either. But like the song by Marvin Gaye and Tammi Terrell says, "Ain't nothing like the real thing."

Yolanda Williams, the director of the upcoming "For Colored Girls Who Have Considered Suicide When the Rainbow is Enuf" production in Jackson, has more than a decade of theater experience. She has an unquenchable thirst for theater, she says, and a passionate love for this timeless classic.

When asked what her favorite poem is in the play, she names one, then another. "Depending on how I'm feeling, they are all my favorites," she says, finally.

The play is about several African American women and their struggles.

It must have been serendipity, because her dream project is also her first production in her hometown of Jackson. She and the actresses have been rehearsing to the point of exhaustion to get ready for opening night. They want to do Ntozake Shange's brilliant literary wonder justice by making her poems jump off the page and creating a truly metaphysical experience.

"I could have not asked for a more amazing group of seven actors and one amazing stage manager," Williams says.

Shange's kaleidoscope of 20 poems entwine in a sort of tapestry. This is not a play to watch passively; it's an emotional journey through time, a chance to relive childhood memories of hide-and-go-seek, nursery rhymes and double Dutch, blissfully ignorant of the brick road that is life. You'll relive the naivete of being 18, graduating from high school when the world was new, and re-experience the awe of realizing that you are no longer a little girl, but a woman.

The play's stories of the heartbreak of one-sided romances, spiritual stagnation, abortion and domestic abuse will remind you of the time you realized that you must hurt to live. The tragic tales of the lovelorn and of unspeakable loss will leave your heart feeling wrung out like a dish towel.

While the women's experiences leave the characters feeling withered like a lantana flower deprived of water, the clapping, stomping and synchronized movement-delivered poetry show has an impervious spirit that lives inside them and won't let them quit. It's a celebration of the "hue-man" condition that transcends time, economics, geography and skin's pigmentation.

For those who have seen Shange's play, Sechita's spellbinding dance is usually a highlight of their night. It's a corporeal concerto accompanied by a linguistic portrait of a carnival dance that embodies all colors of the spectrum. Sechita seems to be a conduit for the words to pulsate through her as they waft to the audience. Her lithe movements are so beautiful they hurt. Even her arms tell a story, like a Hawaiian hula dancer's arms. Sechita's arms reach for the heavens. Her kicks slice the air like a ninja sword. Audience members can find themselves mentally matching the dancer's movements while swaying to the music note by note while being audibly pleasured, line by line.

Oh, yes. This is poetry in 3-D--without the glasses.