Of Skates and Smiles 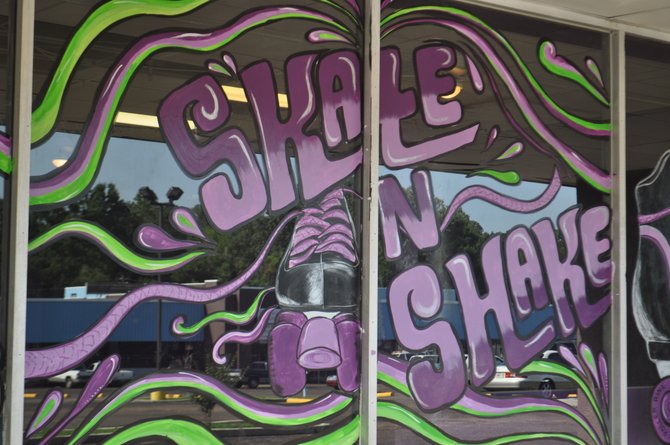 Shanetha Lewis is all smiles at the front door of her soon-to-be-opened roller rink, Skate and Shake, in the Jackson Square at 2416 Terry Road. Underneath the powder-blue siding, a purple '70s-type mural is painted on the windows, with the Skate and Shake logo in the center.

A schoolgirl with long flowing hair frames one side of the logo. She skates with her left leg cocked at an angle and wears a purple Skate and Shake T-shirt; she looks like she doesn't have a care in the world.

As if mesmerized, a schoolboy in a green Skate and Shake shirt and green baseball cap stares at the girl from the other side of the mural. He looks as if he's too scared to ask her to dance—but too cool to skate. Green and pink ribbons and stars surround him. The window also displays a big roller skate and more stars, beckoning passersby to come in and skate their problems away.

At the time of our interview, the inside was still a work in progress, with remnants of construction remaining, the walls unadorned. But Lewis led me to each room, outlining the amenities her new establishment will offer: a kiddie skating room, birthday-party rooms, a spacious open skating area in the back, a game room, even a no-kids-allowed area for the adults to play pool and hang out while their kids skate and shake.

She then filled me in on her new business venture.

Tell me about yourself and where you're from.

I was born here, but I was raised in Chicago, Illinois. I have three children. My daughter, Shenera, is 24 and attends Jackson State University. My two sons, Doniven, age 17, and Deymeion, age 16, attend Chamberlain-Hunt Military Academy in Port Gibson, Mississippi.

Your daughter owns a store in Jackson Square?

What sparked you to start up a roller rink here in Jackson?

I just wanted to see if it would be fun, and it's actually pretty cool to transform a warehouse into a skating rink.

Do you have fond memories of roller-skating in roller rinks as a child?

Yes, and we actually went out of town. Chicago had a roller-skating rink but it closed down, and everybody had to go to Gary, Indiana. I've been to several other places though: St. Louis, Missouri, Kansas City, Missouri, and Cleveland, Ohio—just those three central areas.

What do you have planned for the adults?

I am trying to incorporate different nights, different themes like Old School Night, Hallelujah Sundays, Throwback Thursdays, Fun Fridays, Come Represent Yo Hood Night. I've got some wonderful ideas. I just can't wait to get started and get open!

What are your hours of operation?

Right now, since school is out, we're going to open at 10 in the morning until midnight. Then, when school starts, we'll go in after-school and stay open just a tad bit longer on the weekends—just a tad.

Will this business have summer and after-school job opportunities for kids?

Yes. I think I have incorporated quite a few college students. ... I have 20 employees.

You told me that you have hired additional security.

I've hired an entire force. (Capital City Security will have) five security officers patrolling the parking lot and inside the building with cameras installed, just to make sure that everyone is doing what they're supposed to be doing.

Do you have any other long-term aspirations, business-wise?

This is it for me. I've had several other different business adventures. I pray to God that this works out and brings much success to me as well as the city of Jackson.

What other business adventures have you had?

Well, I've owned my own dump trucks; I've had a construction crew. I have worked for Allstate as well as the Metrocenter Mall.

Are you currently involved in any business associations in Jackson?

I'm trying to incorporate it now. I am developing a web page as we speak. We're just waiting on finishing (the space) so I can take pictures and put those on there.

Do you have any advice for anyone who is maybe thinking of starting a business in the city of Jackson?

It's a lot of hard work. Be patient; continue to pray and hope that God sends (you) in the right direction. He put me on this path, and I'm going to just stick this out until the end. With the Man behind me, I can't go wrong. You can't go wrong.