A Journey to the Center of the Mind | Jackson Free Press | Jackson, MS

A Journey to the Center of the Mind 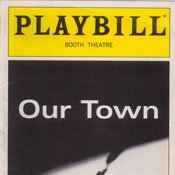 Minimalistic "Our Town" allows viewers to place themselves in the actors' shoes.

Thornton Wilder's Pulitzer-Prize award-winning 1930s drama, "Our Town," is not just a play, but a spiritual voyage. The stage is barren, except for a row of chairs, and dialogue is often spoken atop ladders that represent houses. The actors mime most of their actions, drinking from invisible cups and throwing invisible newspapers. This alternate reality gives meaning to Wilder's quote, "Our claim, our hope, our despair are in the mind––not in things, not in 'scenery.'"

Wilder's play proves that the simplest things can pack the hardest punch. The stage manager acts as tour guide by breaking the fourth wall and addressing the audience directly. As we visualize the invisible scenery, we in the audience unconsciously see our own neighborhood and our own lives, giving a double meaning to the title "Our Town."

"Our Town," opening June 7 at the Black Rose Theatre in Brandon, provides a glimpse into the lives of two families, the Gibbs and the Webbs, in the fictional town of Grover's Corners, N.H. The two families are typical of the turn of the 20th century––the men conquer their spheres of the working world, and the women corral the household. Emily Webb begins as an insecure yet ambitious girl, and George Gibbs as a confident jock and a bit of a dreamer. They fall in love, thrusting them onto the fast track to marriage and a family of their own. Sadly, they also careen into tragedy. Wilder's tale of living and dying in a isolated town serves as a case study that reminds the audience that life is fleeting, and we should enjoy this life as we live it.

As I watch the cast doing its second dry run of Act II, director Kris Vick sits in the semi-darkened theater and watches the cast run through their lines. There's no notebook in his hand; he just sits back in his movie theater chair with his arm draped on the seat next to him, as if he is an audience member with an invisible date seated next to him.

Afterward, Vick gives feedback to the actors. He starts by complimenting them on the fact that they hardly ever had to call for lines. The cast, sitting on the edge of the black wooden stage, claps and cheers loudly, all smiles. When he corrects Tommy Kobeck on a misspoken line, he says gleefully, "Her stomach ain't never gonna be the same?" Everyone erupts into laughter, and after it quiets down, he tells him the correct line: "Her stomach ain't what it ought to be."

But even in jest, Vick is the pilot of this production. He always addresses the actors by their stage names, never their real ones, keeping them in the correct mind-set for his sixth production for the Black Rose Theatre.

"The play deals with so many themes," Vick says. "I just want (the audience) to be enlightened about this play that touches on so many universal truths."

Vick has been involved in the world of theater for more than 26 years, with a love inherited from his mother, Lydie Vick, who is the production's assistant director. She has seen "Our Town" over a dozen times.

"It's one of my favorite plays," she says. "It's very well written. Every time I see the play, it's just magical." She promises that when I see the climax, I'll get goose bumps.

In the spirit of the play, I ask Kris Vick when was the last time he did something fun and spontaneous. "It's been quite a while," he responds. I suspect that is the case for most of us––perhaps it's time to add a good play to our schedules.