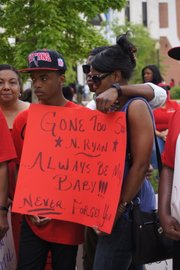 Damien Henderson consoles his mother, Sanya, at a rally and march to remember Nolan Ryan Henderson.

Jackson police released more details this morning about yesterday's arrest of Jarrod Emerson, a cousin of Jackson State University freshman Nolan Ryan Henderson who was shot and killed at a party over the weekend.

According to Jackson police officials, Emerson, who is charged with murder in Henderson's death, turned himself in yesterday and helped investigators recover two handguns.

A city hall news release sent out Wednesday afternoon indicated Henderson called Emerson after being assaulted at a party at the Palisades Apartments, near the campus of Jackson State University. Emerson then reportedly met up with Henderson at U.S. 80 and Lynch Street before heading back to the Palisades Apartments to confront the people Henderson said beat him up. Emerson, armed with 9 mm and .40-caliber handguns, confronted "several individuals" at the complex, pulled his weapon and fired several shots with the .40-caliber handgun, said Assistant Police Chief Lee Vance. The crowd scattered and Henderson was shot in the face.

Vance also confirmed that Henderson had been involved in an altercation with "some of the football players" from JSU. The cookout and pool party that took place at the apartment complex was reportedly for graduating members of the football team. Henderson's family and friends have maintained that members of the Jackson State University football beat up Henderson after he accidentally bumped into one of the players. At a rally held on JSU's campus Wednesday morning, Henderson's mother, Sanya, identified a senior football player by name.

Police sought murder charges against Emerson after consulting with Hinds County District Attorney Robert Shuler Smith's office, Vance said. Despite Henderson having apparent scars on his knuckles and a wound on his head, Vance said that because Henderson left the party under his own power, police cannot make an arrest in Henderson's assault unless an eyewitness comes forward and signs an affidavit.