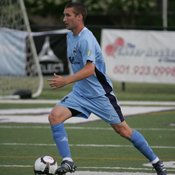 Clinton native Michael Brown will return to the capital city area to play soccer for the Mississippi Brilla.

Michael Brown is coming back from California. A Clinton native and former captain of the Stanford University soccer team, Brown has signed with Mississippi Brilla FC.

"Michael is one of the hardest working players I have ever coached," head coach Dave Dixon said in a press release. "His play is consistent, and you always know what kind of effort and performance you will get when he steps on the field."

While playing for Clinton High School, where he graduated in 2003, Brown was a three-time all-state, all-district and team most-valuable player pick. He was also district player of the year for the Arrows.

In his freshman season at Stanford, Brown started 13 of 18 games, usually at midfield or defense, and attempted two shots. In his sophomore year, he started all 18 games and attempted three shots against Pac-10 rivals Oregon State, which was a career high for him.

A franchise of Brilla Soccer Ministries Inc., the Jackson-area soccer club competes against other minor-league franchises in the Southern Conference of the Premier Development League, which is part of United Soccer Leagues.

The 2012 season begins Saturday, May 12, on Mississippi Brilla's home (Harper Davis Field at Millsaps College) against the Ocala Stampede.

Brilla also signed Jackson native and former Jackson Prep standout Phillip Buffington. Like Brown, Buff has been a part of Brilla since the 2007 inaugural season. His career has included playing for the Marshall University and Mississippi College soccer teams and the USL Pro League's Harrisburg City Islanders. Buffington also spent a season with Wollongong of Australia.

"Michael and Phillip will bring a level of experience and maturity to the 2012 team," Dixon said. "Their leadership on and off the field will be vital to our success this year."