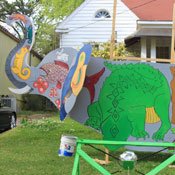 Trace Alston and his daughter, Mary, built a wildlife scene on their golf cart for this year's Zippity Doo Dah parade in Fondren. Show up at 7 p.m. on March 24 to see the little elephant (and friends) roll.

Alexander "Trace" Alston, 50, has been to every Mal's St. Paddy's Parade since the beginning. As part of the Rude Men Krewe, Alston and 75 fellow krewe members from all over the country descend on downtown Jackson every March to dazzle the crowds with big beads and even bigger floats.

But don't think the Rude Men are limited to one weekend out of the year. As the second annual Zippity Doo Dah Parade rolls through Fondren, Alston and his krewe will be marching to a jungle-themed tune as part of this year's festivities.

"We've been marching with the Queens since 1982, when we were known then as the Rude Boys," Alston says.

The first event raised more than $65,000 for sick and injured children in Mississippi. Last year's parade lured visitors from 39 states and four countries.

Like any great parade, this one has floats, but the Zippity Doo Dah floats are decorated electric-powered golf carts.

Alston says his float will coincide perfectly with this year's theme, "Amazon: Run through the Jungle," with its colorful animal motif. Now all grown up, the Rude Boys (now Rude Men) along with their Rude Women and Rudelets dazzle the crowds with outlandish creations and beads—and their own golf-cart creation.

"We just want to bring the spotlight to support Fondren and the children's hospital," Lee says. "We live in the shadow of that hospital and have family and friends that count on that hospital."

Lee's reasons for supporting the parade and the hospital go beyond her desire to dress up and decorate a tie-dyed float. Lee's granddaughter, Abbie, seeks treatment for severe asthma at Batson.

"That hospital is near and dear to our hearts," Lee says of Batson.

Because The Classy Mates began with former classmates of Jill Conner Browne, their float always involves tie-dye and, as Lee puts it, "love, peace and SPQ."

This year, to go along with the theme, the Mates' golf cart will be decked out in vines, flowers and jungle animals as they parade through the streets of Fondren.

"We'll be marching in our tutus and butterfly wings," Lee promises.

The Zippity Doo Dah Parade is open to anyone wanting to participate, although it is too late to get a float in the parade.
Parade details are on the event's website at http://www.zippitydoodahparade.com.