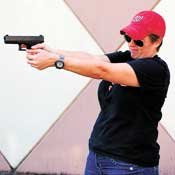 I'm going to be completely honest: I'd never held a gun before. I always thought guns were for thugs and hunters. I simply didn't need one. So it may surprise you that on Saturday, Oct. 8, I spent the better part of the day at the Jackson Police Department rifle range working on my target practice.

I moved to Fondren in March, renting a little duplex in the Broadmeadow neighborhood for just my dog, a German shepherd named Atlas, and me. Everything was going great until the neighborhood dogs started barking—all night long—followed by the sound of power tools at all hours and some suspicious behavior coming from the empty lot behind my house.

At my landlord's suggestion, I decided to attend my local Community Oriented Policing Strategies meetings for Precinct 4 and address my concerns to our Precinct Commander Wendell Watts. At the COPS meeting, I found out I wasn't the only one who had a problem with the illegal business going on in my neighborhood.

During the meeting, a quality-of-life officer mentioned the Citizens Police Academy class beginning the first week of October. In this class, participants would have the opportunity to shoot a police-issued Glock handgun and go on a ride-along with a JPD officer. We would also discover that the police department doesn't solve a crime in 30 minutes like on TV.

Working for the Jackson Convention and Visitors Bureau, it is my job to bring tourists, family reunions, meetings and events to Jackson. Many times the JCVB misses out on opportunities because of the "perception" of crime in our city. Every time you turn on the news, it's as if yet another crime has been committed in Jackson. Even our neighbors in other cities use crime perception to win elections.

The Jackson Police Department is the only local police department that reports crime numbers; the rest don't. So why is it that Jackson has so much crime if there is no mention of any other city's crime? It makes sense for the local media to report on crimes in their own back yard. Maybe it's easier than trekking out to the suburbs to sniff out a story.

I spent the week of Oct. 3 as a student of the Jackson Police Department. Each evening, the instructors educated us on different aspects of life as a Jackson police officer. From dispatcher to SWAT unit, we learned to trace an incident from the first 911 call to the case being delivered to a grand jury.

I even had the opportunity to shoot three guns at the JPD rifle range. Considering I've never shot a gun before, I listened intently to my instructors and was able to shoot dead center on my targets.

The thing I found most amazing about my experience was the percentage of crimes JPD solved compared to the national average. Last year, JPD's average of solved versus unsolved crimes was 80 percent. The national average is about 67 percent. Our police department has a better crime-solving average than the U.S. as a whole. That says something.

When I graduated from the JPD's Citizen Police Academy, I received a certificate, a hat and a mini-badge that I have proudly displayed in my office. My head is full of facts and figures, information and experiences. This much is clear: We have a great police force and a mayor and police chief who are committed to keeping the streets of Jackson safe. But they can't do it alone. We, as citizens of this city, must take an active role in preventing crime.

For starters, get to know your neighbors. Be a strong advocate for a neighborhood watch. Go to your monthly COPS meetings. Report suspicious people, vehicles and activities to the police. Be a smart shopper and not only lock your car, but don't leave valuables in plain sight. Enroll in the next Citizen's Police Academy and learn firsthand about how our police department works.

We all have a stake in a safe city, but we also need to recognize that it is the everyday citizen who sees what the police can't. We must be the eyes and ears of our city. It is our civic responsibility to partner with the Police department to help curb crime. I was so inspired by this class that I have applied to serve on the JPD's Citizen Reserve.

This is my city. My home is here, and my life is here. I have decided to be a champion for my little piece of Fondren.

So the next time someone asks me about crime in Jackson, I can proudly say we fight crime in this city as a team, made up of dedicated public servants and concerned citizens who work together to prevent crime.

When crime does strike, we have one of the finest police departments in the country, whose crime-solving ability is far above that of the nation as a whole.

The next time you see a Jackson police officer, thank him or her for their service, and make a commitment to partner with JPD so that you may also become a champion for your city.

JPD Sez ...
• If you carry a knife on your person where the stock and blade are more than four inches in length, police will consider it a concealed weapon. A screwdriver, however, can do more bodily harm and isn't considered a weapon.

• Be a "nosy neighbor." Get to know your neighbors. If you know someone is going out of town and then see a moving van pull up, be suspicious. Don't be afraid to call the police if you see something or someone out of the ordinary. Be an advocate for your block.

• Did you know that the average percentage of solved versus unsolved crimes in the United States is about 67 percent? Jackson's average last year was 80 percent.

• The age of consent in Mississippi is 16. What should a parent do to protect their child? Be an active parent. Know your kids' friends. Check their phones, ask questions, and remember that while you may strive to set the right values, you have to know and understand peer pressure and know that if you aren't teaching your kids, their friends are.

• Since Mississippi passed a law requiring a prescription for drugs containing pseudoephedrine, there has been an 85 percent decrease in meth labs, according to the JPD. The most common illegal street drug is still crack cocaine.

• The Jackson police SWAT team is one of the oldest in the U.S., formed in 1971. Jackson's SWAT team is made up of six members, and includes a sniper and a fully licensed medical doctor who had to pass the same qualifiers as the rest of the team.

• Mississippi has four bomb squads, based in Jackson, Clinton, Tupelo and Biloxi. The FBI regulates each squad, and they agree to the stipulations handed down by that agency. Each squad must respond to calls 90 miles in any direction.