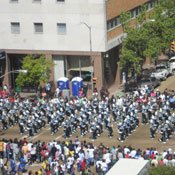 The Jackson State University marching band was first organized in the early 1940s. Over the years, and eventually under William W. Davis, a former arranger for the legendary musician Cab Calloway, the band's style began to pay tribute to Calloway's sound and showmanship. Davis molded the Sonic Boom into a renowned marching band known for its elaborate maneuvers, precision marching and big band sound.

Today, director Lewis Liddell Sr. Leads a band of 300 members and the legendary Prancing J-Settes, the JSU dance team, in a show-stopping experience that must be witnessed live to fully appreciate. The Sonic Boom performs at all JSU football games and throughout the year at special events such as this weekend's ZDD parade.

Just stand back and enjoy.