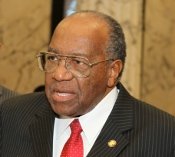 Sen. David Jordan, D-Greenwood, wants school funding to be a bigger part of the education debate.

Even though no legislative budget exists yet, that hasn't stopped Democratic and Republican legislators from staking out positions on key areas.

Knowing that budget negotiations will get dicey, Democrats held a press conference this week to announce their intention to draw lines in the sand to prevent deep cuts to education and health care.

"We won't accept a budget that has one penny less (than current funding levels) for public education," Sen. Hob Bryan, D-Amory, said.

The pattern of decreasing state revenues does seem to be turning around. Darren Webb, the state's economist, delivered a cautiously optimistic forecast this week that anticipates $99 million more in revenue in the coming year based on higher-than-expected tax collections.

"While we have avoided a recession, and the outlook has improved, the economy remains weak by historical standards," Webb told the Joint Legislative Budget Committee on March 20.

Medicaid also would receive funding at the same level as fiscal year 2012 at $763 million, despite the Center for Medicaid Services projection of 36,000 new eligible enrollees in the program this year.

Republican lawmakers seemed less than impressed by the positive revenue news and remain nervous about the tenuous nature of economic gains.

Rep. John Moore, R-Brandon, asked if Webb's recommendations included the effects that $5-a-gallon gasoline will have on the state economy. Webb's estimate anticipates that the economy will lose steam, but he added that the state would only have to grow by 3 percent to meet its estimate.

Rep. Steve Holland, D-Plantersville, said the extra cushion should enable Republicans to keep spending levels the same for the next fiscal year.

"If they don't do that, they're just mean," Holland said, hitting the floor with his cane.