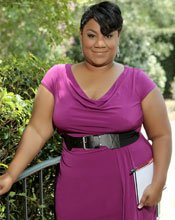 "I have big, big, big faith," Felicia Tillman says. The 34-year-old Jackson native believes that becoming the author of two plays was a spiritual thing for her.

"I (had) never had a passion for writing at all, and one day I just felt like I should write a play," she says.

Her production company, Made'lyn Productions, produced "U Got to Hurt Before U Heal," Tillman's first play, in 2011. It centered on a promiscuous woman, Nikki, who comes to realize she needs to stop hurting the people she loves.

Though Tillman says the first play involved many situations she had never experienced firsthand, she noticed some parallels between herself and the main character. Nikki is a woman looking for love, and Tillman says that love is what she searched for most of her life.

"Everyone is looking for the same thing," Tillman says. "Everybody's looking for this love, this feeling. That doesn't exist in man. And when I say that, I don't mean a man or a woman, but mankind." For Tillman, that love comes from her relationship with Jesus.

Tillman has overcome great adversity in her climb to becoming a successful businesswoman and playwright. After dropping out of high school and becoming pregnant at 18, she persevered with the helpful guidance of her grandmother. She obtained her GED in 1996 and then her bachelor's degree in accounting from Jackson State University in 2008. She now lives in Byram with her three children: Deja, 16; Dymond, 9; and Quintin, 6.

Her desire to always stay busy led her to own a tax service, Legacy Tax Service, as well as Made'lyn Productions, which specializes in event planning and entertainment. "I always had this go-get-it type of spirit. ... I am a big-time multitasker," she says. "I knew I wanted to do something that was busy all the time."

As a mother of three, an owner of two businesses and the author of two plays, Tillman says balance is key in her daily life.

"I am a big procrastinator. The thing is, I do not let (the procrastination) go for a long period of time," she says, laughing. "I try to balance it all, and I make sure that I have family time."

Tillman's second play, "It's Time to Take Out the Trash," premieres June 30 at Jackson's Thalia Mara Hall. The play is the sequel to "U Got to Hurt Before U Heal." Adding to her busy schedule, Tillman plans to take her second play on tour to Memphis, Houston and Atlanta. She is also working on finishing her first book and plans to write a third play.