A Little Love Note to the City of Jackson 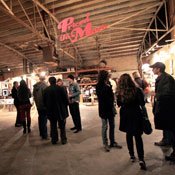 Fashionista, Screech-hater and, dare I say, philosopher Lisa Turtle once asked, "What is art? Are we art? Is art art?"

While Turtle, of "Saved by the Bell," wasn't breaking any new ground in the world of art philosophy (she didn't even get into Stansbury College), she did bring an ageless debate to Saturday morning. Artists, philosophers and consumers have grappled with this question for millennia, only to never quite arrive at a consensus answer.

Trust me, I'm not about to give you the answer or even get involved in this debate. What I can do, however, is guide you to a place where you can interact with art and artists and even cop some local art for yourself.

On June 15, 16 and 17, the old federal courthouse in downtown Jackson will be converted into a pop-up art gallery featuring work from some of metro Jackson's artists. A pop-up gallery happens when artists set up an art show in a space that was not previously intended or used as a gallery. It is akin to a flash-mob, which are all the rage. (Note: I hate to make that comparison because I could do without flash-mobs, but that is an entirely different column altogether). It is, in the parlance of our times, an occupation.

This pop-up gallery for Jackson artists is the brainchild of local graphic designer and artist Ian Hanson and local artist and musician Cody Cox. "We agreed that it is easy to support your friends who are in bands," Ian says. "You pay your $5 and the band gets paid and that's that. But it's harder to get people to come out and buy art usually, unless you are in an upper-income bracket."

With that in mind, Ian and Cody organized the "Priced to Move" pop-up art gallery. The first one went down last December at Andy Hilton's studio in Midtown. Based on the success of the first installment, they decided to give it another go this month downtown.

There is one catch, though, with "Priced to Move"––all artwork in the pop-up must be priced at or under $100. This gives people who might not normally have the cheddar to buy local art the opportunity to support local creativity. "We want to make art available to people who play in bands, work in the service industry and things like that. There's no budget, no gallery commissions. It's all so artists can make a little money off their work" Ian says. "It's a little love note to the city of Jackson."

In addition to the art for sale, the weekend will feature music from Hott Mess (Josh Taylor and Jarad Wilson), DJ RePercussion, Liver Mousse and DJ Young Venom. Admission is free, and there will be food and drink available. Ian likes to think of the whole thing as more of a party celebrating art, as opposed to a stuffy gallery setting. All manner of art will be available, from photography and paintings, to mixed media, screen prints and concrete. "We are pretty well-rounded this year," Ian says.

So, can Ian offer us any clues to answering Lisa Turtle's question? In my best James Lipton voice I asked, "What is art?" He replied, "There's nothing I could say that I would let you quote me on." Fair enough. Guess we'll just have to go see for ourselves.