Welcome to the Terrordome 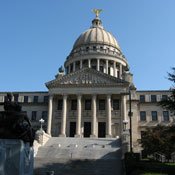 Just before the Senate convened on Monday, a young lawmaker tried to jam a fistful of blue and white pieces of paper into an already overstuffed bill box.

The scene was telling. The Capitol is finally showing signs of life after an unusually lethargic first week and a half of a legislative session characterized by receptions and resolutions to assign parking spaces.

"Things are getting kicked off slower than in typical years. It'll take some time for folks to settle in," said Sen. John Horhn, D-Jackson, in an interview Friday.

Horhn wasn't kidding. As of press time on Tuesday, a torrent of 175 bills had poured into various Senate committees.

In the other chamber, few bills have emerged in the newly Republican-run House, where Speaker Phillip Gunn, R-Clinton, has been slow to name all the people who will chair the various committees. The most legislatively significant House action so far came on Jan. 11, when the body voted on a new set of rules for committee assignments. Specifically, Republicans made sure that their party would control the purse strings on the Appropriations Committee and Ways and Means.

Under the new rules, the two committees will consist of six members from each of the four congressional districts based on seniority. The House speaker would then appoint nine at-large representatives to each, rounding out the membership of each committee to 33. Previous rules established 30 seats--six from each of five congressional districts (a federal court recently took one away through redistricting). The  seats were previously appointed based on seniority with the Speaker selecting just three members.

Rules Committee Chairman Rep. Mark Formby, R-Picayune, was unapologetic about the motivation behind the new way of doing business.

"I don't deny we're not trying to give Republicans a majority on the two money committees," Formby said last week.

A cursory look at the list of bills signals the reemergence of several controversial measures, which the Republican-led Senate passed in recent years but died in the House.

Les Riley, founder of Personhood Mississippi, told the Jackson Free Press last week he expects the House and Senate to introduce versions of a personhood bill shortly. Mississippi voters said emphatically last November that they do not want a personhood amendment to the state constitution. In the meantime, state Sen. Joey Fillingane, R-Sumrall, introduced two abortion-related bills of his own. The first, SB 2008, requires board certification in obstetrics and gynecology for doctors performing abortions in abortion clinics. Another requires abortion-clinic doctors to have admitting privileges at a local hospital.

Lawmakers also waded into the controversy over ex-Gov. Haley Barbour's granting clemency to more than 200 criminals. On one hand, two-term Republican Sen. Michael Watson's SB 2050 would prohibit convicted murderers from working at the governor's mansion through the trusty program, while Fillingane introduced a couple of bills to limit the powers of the state attorney general, which prompted criticism from Democrats.

Together, the Sunshine Attorney Act (SB 2084) and the Transparency in Private Attorney Contracts Act (SB 2102) revises the state AG's power to contract legal work to private firms. SB 2084 mandates that the attorney general issue requests for proposals for legal work, requires the state Personal Service Contract Review Board to provide oversight of the agreements and would allow state agencies, typically represented by the AG, to hire their own outside counsel in "certain situations." SB2102 requires the attorney general to justify using outside counsel, caps the fees outside lawyers can collect and requires the attorney general to post copies of the contracts on the office's website.

"You have a solution looking for a problem," said Rep. Bob Evans, D-Monticello, referring to the bills. "These people who are doing this aren't trying to cap the amount CEOs are making. It seems like if you're looking for injustices, you could look at that."

Bills of Note This Week

The Medicaid eligibility every six months is ridiculous. Situations in families receiving Medicaid rarely change in 6 months, its double the paperwork and double the face to face eligibility meetings. Just another way to reduce the rolls. What's up with the Medicaid/car tag issue? That's just stupid and sounds personal.

The Medicaid eligibility every six months is ridiculous. Lori it will be some job security for them, lol! The car tag issue, I guess, stems from people taking advantage of the system, so it was put in there as, a gotcha clause. They don't want anyone driving a high value car getting public health care. It is what it is.

You can put a distinctive tag on a "hooptie", aka old car, so I'm still searching for the logic behind that one? Clueless in Jackson.

SB 2071: Establish Open Primaries Hopefully it will pass I'm with you on this. I'm an independent, and I don't want to have to register as a member of a political party just so I can vote in the primaries. I see that as a form of disenfranchisement since 40% of U.S. voters are independent. More info at independentvoting.org.

trust me you have to be pretty damn broke to get medicaid in the state of MS and I'm sorry but if your kids are on medicaid or even if you are and you save up your pennies (or use your tax refund yes poor people work) to put a specialty plate on your car so what. Not to mention I know plenty of seniors who they don't even pay the extra fee for their specialty plate their kids do. This is stereotyping and its a waste of time. Isn't it really just costing the state money not hurting the people who need medicaid because folks just won't get them.

I encourage ya'll to actually go and read these bills SB2153 is a waste of paper why is this even being brought up? Really a Constitutional amendment to make kids say yes sir and no sir in school. Um talk about oppression. http://billstatus.ls.state.ms.us/2012/pdf/all_measures/allmsrs.xml

I read 2153 and my mouth is still open. Stand up when an official enters the room. And then you want children disciplined if they fail to say yes sir, no mam.... I'm still shaking my head.

Laurie- That's not oppression, that's the schools having to teach kids to be repectful of adults and have proper manners, something their parents should have already taught them. Sad, the state would have to go that far. I will agree with you part A is overboard,but part B been is very much needed. My 15yr old daughter told me a couple months ago, she couldn't believe how many of her friends and other students were so disrepectful to the teahers and even their own parents. For a child her age to mention it's a problem then it really must be bad in the schools.

Bubba if they were simply worried about raising they level of civility in school they would incorporate character education into the curriculum for the state. That's not what this is. This isn't talking about what respect is, or even teaching real meaningful life manners (you know ones you use everywhere not just in the south). My children are not rude children and I don't make them address everyone as if they are attending military school for that to be true. What this bill is talking about isn't respect its authority. It also caters to that we have to get back what we've lost mythology. How about this we have to start treating youth like people too and not give school districts another way to throw them out of school. If this becomes a mandatory rule leading to discipline then who determines the discipline in each district. That means if its like most things in JPS where a certain number of write ups equal ISS, a certain amount of ISS equal suspension, you see where this could go. All for not standing or saying yes sir. Please! He should've called it the Stepford children bill-teaching our children to be little robots of none questioning conformity

Laurie- Our definition of child being rude is very different. If someone asked your child a question and they answered yes or no and not yes sir or no sir, I would think they are rude and disrepectful. That was the way I was raised and my children were raised.My children wouldn't even think of saying yes or no to any adult. I probalby say yes ma'm and no ma'am to 99% women over the age of 18 if I am talking to them, ask Donna, she has fussed at me few times for it.LOL You ain't from around here? Are ya? LOL

SB 2122: Prohibits texting while driving Where do I sign? What do I need to donate? I'm for this one, assuming what's in the title is in the bill. I'd need y'all to put down your phones!

No Bubba I'm not and my kids actually have the good sense to adapt to their situations (most times) and add the ma'am and sir when needed. In my home tone is very important. I just think you should not penalize children for something that is really a cultural difference and not actual disrespect per say. I know, I know my yankee is showing but so be it. I still call people ma'am and sir too depending on my situation. It's not how I speak to my mother we are not that formal. My greatest concern is making sure the school system doesn't have another way to shuffle children out of school.