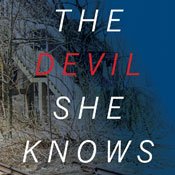 As soon as I began reading Bill Loeh­felm's third book, "The Devil She Knows" (Farrar, Straus and Giroux, 2011, $26), I developed motherly concern for the book's protagonist, Maureen Coughlin, a Staten Island waitress who feels as if her life is slipping by. Maureen has been a bar waitress for more than 10 years and wants a change. She lacks male companionship, unless he's married and has no real friends. Folks around the bar know her for her recreational drug use.

Maureen tries to find ambition in the little things, such as feeding stray birds and protecting them from cats. She's joined a gym, but has put off going for months. She has a plan to return to school and this time, she thinks, she won't date her married professor. Just a dash of cocaine before work will get her through the night.

Just as Maureen is ready to start on that gym membership, her boss calls her in to work an important political fundraiser.

"You're totally murdering me," she tells him. "One more night just might do me in for real." Little does Maureen know that she may not be exaggerating.

After hours, Maureen walks in on a coworker Dennis and Frank Sebastian, a powerful aspiring politician, having sex. Maureen pretends she didn't see anything, and when that doesn't work, she assures Frank that she will keep his secret under wraps. She means it—right up to the next morning when Dennis is found dead. As more dead bodies appear, Maureen decides to bring down Frank Sebastian.

At one point during the action-packed journey of "The Devil She Knows," I actually found myself yelling at the book as if Maureen could hear me: "Get out of there! Go home!" The book is that good.

I have a feeling this won't be the last time I read about Maureen Coughlin.

Mississippi native and Alcorn State grad D.M. Thompson opens her first novel, "Permanent Damage" (Vantage Press, 2011, $12.95) with a bang. As soon as I began reading, Thompson led me into the lives of a baby-swapping doctor, a concerned pediatric nurse and a criminal mastermind. My heart raced in anticipation.

In the following chapters, Thompson introduces Allison Witmark, who has grown up under the watchful eyes of America. Earning a child-prodigy label after scoring high on the ACTs at the tender age of 3, Allison has grown up to become one of the most powerful attorneys in her city. But life isn't all rosy: Her domineering father pushes Allison extremely hard, and she has a horrible relationship with her mother.

Mark, Allison's boyfriend and a paralegal, tries to convince Allison that he is capable of fulfilling his goals and becoming the breadwinner in their crumbling relationship. He just can't seem to emerge from her shadow. Then, Mark decides to share the secret he has been keeping from Allison, bringing all of the Witmark family skeletons out of their closets. Allison's life changes forever.

"Permanent Damage" left me wanting to know more. The beginning grabbed me enough to keep reading; I wanted to know the relevance of that intriguing introduction. A serial killer, Phyllis' sick mother, a womanizing boss and, of course, Allison, are all characters but Thompson never develops them fully. I wanted to know more about Mark, for example. Having a few chapters from his point of view would have been awesome.

The book's ending delivers a surprise and had me on the edge of my seat again, flipping the pages rapidly. But when it was all over, I was left scratching my head. It felt a little like my favorite movie cut from two hours to 30 minutes. Still, "Permanent Damage" is a good, quick read. It delivers a big story in a little package and sets readers up well for a potential sequel.