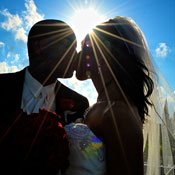 Brice Media specializes in an array of portrait services, both drawn and photographed.

When Charles Brice was overseas in 2008, he and his wife, Talamieka, joked on the phone one day. He was toying with the idea of quitting the Army after five years working as a photojournalist and starting a company to focus on photography and graphic design. He didn't know it, but Talamieka was writing everything down. She had a surprise for him when he returned to Jackson in February 2009 from Afghanistan. While he was gone, she created the name Brice Media and the logo. All they had to do was make their presence known. Naturally, Charles couldn't refuse.

"It's very rare that you get a husband and wife that are artists, have pretty much the same skills and are running their own business," he says. "It's like everything was matched perfectly. You can't ask for anything better."

Charles describes the beginning of Brice Media as "a big question mark." He was still in the Army, and Talamieka was working as a graphic designer at the Methodist Rehabilitation Center. For a while, they just did promotional gigs and not making a profit.

"This year, we're doing it together," Charles says. Now, instead of having jobs outside Brice Media, it's the only thing that the couple does.

Talamieka, 31, got her degree in graphic design from Jackson State University. Charles, 32, graduated with a bachelor's in graphic design this past May. Both of them had artistic backgrounds and thus developed a strong friendship. They got married in 2006.

The first wedding they shot was in 2009. Talamieka speaks enthusiastically about the weddings Brice Media has covered. "It was a blast," she says, remembering one wedding in New Orleans. Another special wedding was in Tylertown, Miss., where the groom had just gotten back from war. While Charles and Talamieka wed in 2006, they didn't have a real wedding until Charles came from Afghanistan.

She is proud of a wedding they covered recently, where the bride's mother was unable to attend the ceremony. "Her mom said 'I feel like I was there' because we captured so many different parts of the story," Talamieka says.

"Every wedding has a different feel," she says.

When approaching a wedding job, the Brices meet with the couple as soon as possible to find out what exactly is important to their story so that they know what to focus on.

"We try to cater it to each couple," she says. "The thing is that none of them feel the same. Everyone has their own sense of magic about it."

"We really look at ourselves as visual storytellers," Talamieka says. "... It's kind of what life is really—it's a story."

In the deluxe photo package, the couple hand-draws the newlyweds' favorite photo. While this is not as popular with the wedding package, Brice Media creates many portraits of pets and children.