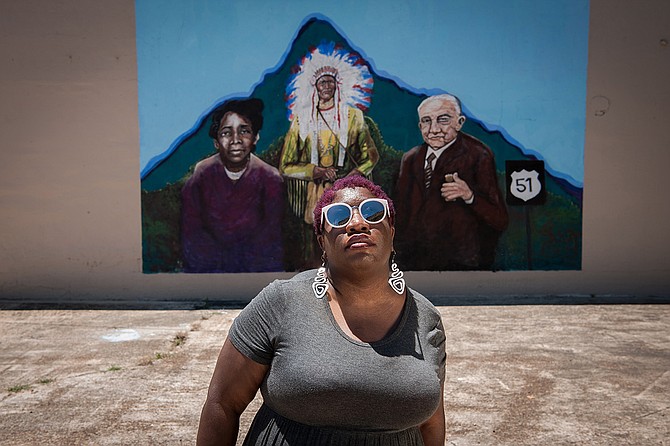 Talamieka Brice wrote, directed and illustrated “A Mother’s Journey,” a film that follows her process in addressing traumas of the past in a quest to seek healing. Photo courtesy Rory Doyle

Red and blue police lights flash in one of the first images presented in Talamieka Brice’s film, “A Mother’s Journey.” Overlain over the sirens, a personal phone conversation between Brice and her friend Clare plays out.

The date was Aug. 12, 2014. Brice had been in labor since 6 a.m. that day, a delivery process that ultimately ended in an emergency cesarean section. But those circumstances were worth the effort to welcome 6-pound, 6-ounce, 19-inches-long Honor Kal-El Brice into the world.

“Have you heard about Ferguson?” Clare asked Brice during the call. The audio cuts there, but the conversation continued beyond what the film shared.

Talamieka Brice had not heard about Ferguson. While she was ushering in new Black life, the city of Ferguson, Mo., was set ablaze as protesters and community members rallied and cried over the police killing of 18-year-old Michael Brown.

Officer Darren Wilson, a white man, shot and killed Brown after the latter allegedly got into an altercation with the police officer following Wilson’s demand that Brown and his friend, Dorian Johnson, walk on the sidewalk instead of the street. Neither Brown nor Johnson was armed during this incident.

Learning of these events, Brice fumed with righteous anger. She had just become a mother to a Black son, and for all the goodness she might instill in him, those lessons may not be enough to shield him from the ugliness in the world, or even the ugliness of Mississippi.

Clare, who had an 8-month-old son and was pregnant with her daughter at the time of their phone call, gave her friend a reminder.

Brice said the world is at a point where, as a Black mother, you scarcely have time to celebrate your child’s existence before life offers you a reminder of the dangers they may face.

“You don’t even have 24 hours before it reminds you that the human you brought into this world is a Black man and how the world may see him just because he is a Black man,” she said. “So, I wanted to make sure that I connected with the viewer out the gate.”

‘There Was Honor and Then Came Love’

Brice’s forearms bear the tattooed words Honor and Love—not as slogans to live by, but as a tribute to her children.

At one point, Brice felt convinced that she couldn’t have children after she and her husband, Charles, had previously suffered a miscarriage, but right on the heels of her father’s passing from cancer in 2013, Brice received some life-changing news while she was contemplating her sense of identity in his absence. She was pregnant. She was a wife, a two-year business owner and, soon, a mom.

“When we lost the last child, I didn’t know I was pregnant. (This time), I was a week late, (so) on a whim, I just bought a test. … As soon as I went in, the very first drop (of urine) was positive,” the mother of two recalled.

Brice and her husband were new business owners. They had hoped to try for kids when they reached their 40s, once the business had settled, but fate had other plans, and Brice said she’s very happy about how her life has turned out.

The idea to create the film stemmed from the time Brice served as a judge for the Magnolia Film Festival in 2019. Brice said she remembers working the festival and not seeing anything to which she felt connected. So, she decided to create her own.

“Parenting is very triggering for trauma survivors, especially. All of the stuff that wells up inside of you, if you don’t fix it, you’ll start rehashing it and putting it on your babies,” she expressed. “I can’t not like my face and there’s a being right beside me that has my face. I really had to make peace with all those feelings, so that he could see the best within himself.”

Brice describes making this movie as similar to creating a mural or another piece of art, something that can exist outside her. “I don’t have to carry it,” she said.

The birth of her daughter, Love Elohim Brice, in 2017 made Brice a mother twice over. Her kids’ names are their roadmap, she explained.

“I wanted them to have instructions for how to survive life,” she said. “What would mommy say because I thought about that after I lost my dad? What advice would he give me? And I wanted my advice to live on in their names.”

Love’s middle name, Elohim, is another name for God. When you love God, it allows you to be able to love people at their worst, the filmmaker explained. As for her son, given the weight that being Black and a man carries in this world, Brice said she thought it would be dope to name a Black man Honor.

Filming started on May 25, 2020, during the pandemic. Brice said that all her jobs had dried up and that she didn’t have anything else to do, providing the perfect opportunity for her to sit with herself and unpack her trauma.

“It just felt natural to go that way, and that was the only thing that made sense to me,” she said.

The film is an amalgamation of many arts forms. There’s poetry, art, photography. And it’s deeply personal, ranging from sonogram videos of her daughter, Love, in the womb, to a portrait of a 5-year-old Talamieka, which she painted herself.

Before moving forward, Brice had to reflect on her family’s beginnings and roots in Duck Hill, Miss. The first day of filming was heavy for Brice. She and film crew joined historian Al White at the lynching site of Roosevelt Townes and Robert McDaniels.

On April 13, 1937, Townes and McDaniels faced accusations of robbery and the murder of white storeowner George Windham. Police had taken the two men into custody for mere minutes before a white mob showed up at the courthouse, kidnapped the men, chained them to trees and tortured them with a blowtorch.

After the torture, the mob burned Roosevelt Townes alive and shot Robert McDaniels to death. Pictures taken of the men prior to being lynched were the first lynching photographs that the national press published. A Grenada, Miss., photographer took photos of the lynching in progress and then sold them from his studio.

Brice said the first day of filming was a heavy one for her, as she had visited her father’s gravesite earlier that day. She prepped the cameramen, Michael Williams and Rory Doyle, before visiting the site. “I let them know that I’m in a vulnerable space and (that) I really don’t know how I’m going to react,” she said. “(I was) trusting them to get the shot of me, to create the work.”

As Brice was unearthing Duck Hill’s brutal past, the video of George Floyd’s murder had gone viral, and she recognized the irony of a Black man being killed in present-day Minnesota while she was learning about the lynching of two Black men decades ago.

“When I left (Duck Hill), that’s when I really saw everything, and I have not and I will not ever watch the George Floyd video,” Brice said.

That day started a journey that would lead Brice from Duck Hill to Kilmichael, Miss., unturning stone after unturned stone, no fears or trauma left unconfronted.

​​”Even with crafting the documentary itself, it’s like, ‘How in the world am I going to do this?’ By the time it’s finished, it’s like the world told me how,” she remarked. “I went to my nightmares and made art, and they don’t scare me anymore.”

The film’s last shot is just as dynamic as its opening. Brice lights a match and sets fire to a red “Make America Great Again” cap while she sits with a burning cigar in hand, a smugness in her grin, as she watches it burn. She even flicks some ashes over it, making it her personal ashtray.

The crew shot this scene in June 2020, months preceding Donald Trump’s departure from office, and it became a viral moment for Brice. She got likes from famous figures such as “Insecure” creator Issa Rae and actor Winston Duke, who played M’Baku in the movie “Black Panther.” She also gained an international following with a big fan base in places like Brazil.

“The Trump presidency was just like being in an abusive marriage. He was hurting so many people, … and all of that just irked me,” Brice said. “Everyday I’d wake up hot at something that was going on in the world. How can I rule this frustration? I’m going to burn a hat,” she remembered.

This resiliency and ability to overcome adversity are traits Brice would like to pass onto her children—who are already imbued with her lips and nose that Brice herself got from her father, as well as with her Grandma Lona’s fighting spirit.

“That’s what runs through all of us. Not that bad stuff doesn’t happen, it’s just that they’re bigger and greater than that stuff,” Brice said. “Remembering that and letting that be the flame that helps you push through in dark times. That’s what I want them to take.”

“A Mother’s Journey” is specific and speaks to the real-life experiences that Talamieka Brice and many more Black mothers experience while raising Black children in a world that white supremacy often rules. If audiences who cannot directly relate take nothing else from this film, they walk away more aware of the privileges they hold and the ability they possess to speak up more, Brice said.

“I just really want people to do the work,” she added. “When anybody within a marginalized community takes time out to educate you on a subject, it’s your responsibility first to be quiet and listen. To inform you of something is an act of service, and not everybody is privy to that.”

Talamieka Brice will show “A Mother’s Journey” on Feb. 9, 2022, at noon for the Mississippi Department of Archives’ History Is Lunch series. The Smith Robertson Museum & Cultural Center will host a brief showing and Q&A with Brice and Kiese Laymon on Feb. 12, 2022, from 11 a.m. to 1 p.m. To learn more about Talamieka Brice and the film, visit her website. To learn more about the Brices’ graphic-design business, Brice Media, click here.