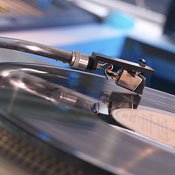 A real vinyl record is far more satisfying than a CD or digitized music. 4 the Record is March 4 at the North Midtown Arts Center.

One of my favorite films of all time is "Pee-wee's Big Adventure." It has stuck with me my whole life. It entertained me as a kid, and it made even more sense in college, often at 3 a.m. while I was discussing the meaning of life with a bunch of hippies. It continues to make me laugh and remember what it was like being a child.

My favorite scene is when Pee-wee finds himself faced with a pet store engulfed in flames. He has no choice but to step in and help rescue the animals, with only the help of a very smart chimpanzee. They go in and out of the store, coming out with different animals each time. What's funny is that every time Pee-wee re-enters the store, he ominously passes the snake aquarium, making a disgusted face with each pass. He knows he has to do it, but he is leaving it until the end, hoping that somehow maybe the snakes can free themselves. At the last minute, Pee-wee emerges from the store screaming with two handfuls of snakes, and then promptly passes out on the sidewalk.

Why am I telling you this? Well, I wanted to set the scene for you to get an image of Catherine and me moving out of our apartment and into our newly purchased home in Fondren a couple of weeks ago. We have a lot of stuff. We are not those "possess only what you can pack in your car" types. We are city folk who need our possessions. It's all great until it's time to move boxes of books, stacks of shoe boxes and records.

Our records are like Pee-wee's snakes. We spent all day that Saturday walking past the records, knowing we were eventually going to have to deal with them, but putting it off until the end. When we did get them loaded in the truck, it felt like we were done. And we passed out, though not on the sidewalk.

All of that said, we really do love our records. Before we even had running water at the new house, I had already diligently organized the albums (alphabetically, by genre). Even though moving them is a pain, there is a certain comfort in re-arranging records, looking at each one, sometimes stumbling upon an album that you had forgotten you even owned.

I know I write a good bit about vinyl in this column, but it is something I feel strongly about. I mean, I love digital music and stay right on the forefront of that movement as well. But there is something about holding a record. It's real. It's fragile. It can last forever, if you take proper care of it. Digital music isn't tangible like that. Cds, because everyone can burn copies, became ubiquitous and, therefore, lost their meaning.

Records remain timeless. Like a relationship, you have to put time into it if you want it to be good. I like that.

On March 3, DJ Young Venom's 4 the Record! Returns to the North Midtown Arts Center for its third installment and one-year anniversary. Vendors from all over the South will convene on the Center's floor to sell, trade, buy and just talk about records. It is a music nerd's dream in its purest form. Just like always, you can come watch me scramble around for money (at the second one I scrounged change from Catherine's purse to buy an original press of "Paul's Boutique"). It's a vulnerability that makes us remember that these records are just an extension of our own humanity. And that gives me comfort as well as hope.

4 the Record is at the North Midtown Arts Center (121 Millsaps Ave.) March 3 from 10 a.m.-3 p.m. Admission is $4 and free for children younger than 12 with adult supervision. Local music fans will sell art and beverages, while local Djs spin all-vinyl sets.